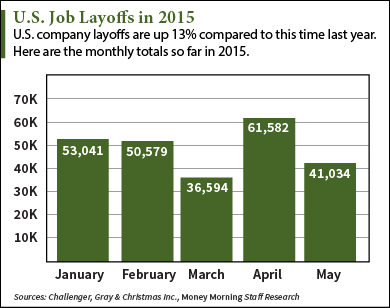 U.S. company layoffs totaled 41,034 in May, according to a June 4 report from global outplacement consultancy Challenger, Gray & Christmas.

Layoff totals, however, ebbed last month after April's tally hit a three-year high. A whopping 61,582 job cuts were announced in April, the highest monthly total since 61,887 layoffs were reported in May 2012.

May 2015's total was 33% lower month over month and 23% lower year over year. Cited for the steep drop-off was steadying oil prices. Just over 1,000 planned layoffs announced last month were blamed on the drop in oil. In April, that number was 20,675.

"Oil prices are starting to stabilize," John A. Challenger, chief executive officer of Challenger, Gray & Christmas, said in a statement. "Exploration and extraction companies responded quickly to the drop in prices, but they are likely to be careful about cutting too deeply, as they will need workers on hand when demand inevitably increases. Unless there is another severe drop in the price of oil, we probably will not see another surge in oil-related job cuts this year."

The financial sector led downsizing in May, with 5,539 job cuts. JP Morgan Chase & Co. (NYSE: JPM) was responsible for most of the layoffs. The banking giant will shed 5,000 branch tellers over the next 18 months.

The government sector, with 5,539 layoffs, was second for U.S. layoffs in May. Massachusetts felt the bulk of the pain. In an effort to close a $1.8 billion budget gap, the Bay State is slashing its payroll count by 4,500.

Expect more state government layoffs over the next few months.

"A lot of states were undoubtedly hoping that economic recovery would solve their budget woes, most of which can be traced back to overwhelmed pension systems," Challenger explained. "For most states, these dreams have failed to materialize. At least 16 states, including Massachusetts, Maryland, Illinois, Wisconsin, and Washington, are expected to experience budget shortfalls over the next year or two," said Challenger.

Following are a dozen notable U.S. company layoffs announced last month. Here are some of the biggest year-to-date layoff announcements.