For June 8, 2015, here's how the Dow Jones Industrial Average (DJIA) did today, earnings reports, the top stock market news, and stocks to watch based on today's market moves… 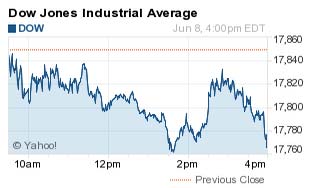 The Dow Jones' close was roughly 82 points lower today as investors raised concerns over a possible interest-rate hike as soon as September and worries over Greece's debt problems cast a wide shadow over the European Union.

Meanwhile, the U.S. dollar slid after reports indicated that U.S. President Barack Obama suggested a stronger dollar was bad for global growth. The White House denied the account, but the damage was largely done before clarification.

Now Today's Top Story for Investors: Get Ready for the Greatest Trade in History