The last four years have been difficult for the gold mining industry. Rising costs coupled with weaker revenue have cut profits, pushing some into bankruptcy.

But Goldcorp Inc. (NYSE: GG) has managed to survive and rise above the rest, avoiding the pitfalls of its competitors.

This means Goldcorp stock is well-positioned to get a nice boost once gold prices move higher again.

Goldcorp is a precious metals miner with operations spanning North and South America. Its operations cover all facets of mining, ranging from exploration all the way to acquisition, extraction, and operation of mines.

One of the reasons Goldcorp stock looks good today is the company's healthy balance sheet.

You see, extremely high leverage has caused many gold miners, some with debt levels beyond 50% of their market cap, to seek bankruptcy protection in the past year. This has wiped out shareholders in the process. 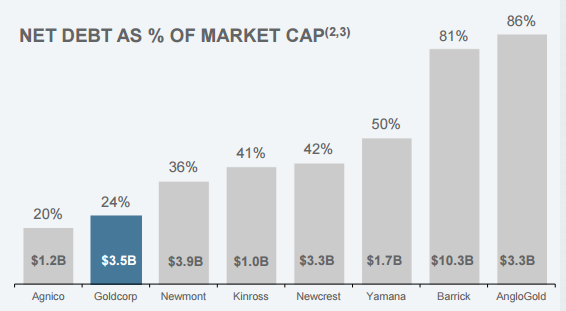 (2) Courtesy of a May 2015 Goldcorp presentation. Amounts as reported in company financials as of March 31, 2015. (3) Go here for non-GAAP disclosure.

But Goldcorp's net debt currently represents only about 24% of its market cap.

Rather than load up on debt, Goldcorp focused instead on streamlining and optimizing operations by boosting gold production, limiting silver output, and trimming costs. And it's worked.

Goldcorp boasts some of the lowest all-in production costs among mining companies. In Q1 2015, all-in sustaining costs (AISC) amounted to $885 per ounce.

What's more, the company's AISC is set to fall even more, thanks to two development projects, one at Eleonore in Canada and the other at Cerro Negro in Argentina. Both of these have low production cost profiles, which could help Goldcorp lower its AISC further to just $750 over the next 12 months.

Here's how it's achieved that growth…