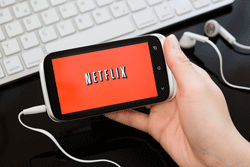 The stock split will bring Netflix's share total to 5 billion. That's more than 30 times the current number of shares on the market. This would be the second Netflix stock split, following a two-for-one split in 2004.

Netflix stock climbed 3% Tuesday ahead of the meeting. That pushed the Netflix stock price to a new high of $648.16. According to FinViz, NFLX has the 8th most expensive share price on American exchanges.

Company sources told CNBC we could see a five-to-one or 10-to-one split. That would bring share prices down between roughly $65 and $130.

But lowering the Netflix stock price isn't the only reason for a split.

Netflix shares have soared in 2015, gaining more than 89% in just over five months.

Now that the Netflix stock split has brought down the price of shares considerably, new investors will wonder whether they should buy NFLX. Here's what you need to know…

How to Play NFLX Following the Netflix Stock Split

Thank you for all your helpful information.