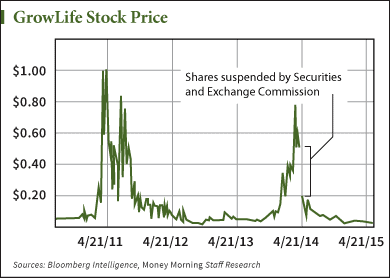 Riding the sudden wave of excitement surrounding a growing push to decriminalize marijuana in several states, investors began piling into pot stocks with reckless abandon. They were hoping to get in on the ground floor of a soon-to-be burgeoning marijuana industry.

A lot of stock buying was done without much due diligence on the part of these investors. That allowed for a number of dubious over-the-counter names to see big gains - sometimes overnight - in a buying frenzy fueled by little else than misplaced optimism.

Perhaps the biggest surge came in March 2014. This was when Washington State began issuing licenses for legal marijuana vendors. The gains were eye-watering for some companies.

But it was short-lived. Almost all of the pot penny stocks that spiked in March crashed shortly thereafter. And starting in spring, the Securities and Exchange Commission was getting suspicious. By summer, it had suspended trading for eight marijuana stocks, GrowLife stock included.

The SEC charged that these companies exploited "the latest innovation, technology, product, or growth industry - in this case, marijuana - to lure investors with the promise of high returns."

You see, these companies trade on over-the-counter exchanges. They aren't subject to the same level of federal oversight in disseminating publicly available information as companies trading on the traditional exchanges are.

And that leaves investors in the dark as to whether these companies really are capitalizing on a soon-to-be explosive growth industry, or simply serving as a pump-and-dump operation for greedy insiders to cash out of once they've attracted enough gullible investors.

That's not to say investing in marijuana stocks is a hopeless pursuit...

Growlife stock was delisted from stock exchange where I bought them and now I don't see an option to sell them. How can I get rid of the shares I own?