The wealth gap in the United States and other developed countries hasn't been this big since the 1980s, according to a new report from the Organization of Economic Cooperation and Development (OECD).

And the numbers in the United States are even worse.

"In recent decades, as much as 40% of the population at the lower end of the distribution has benefited little from economic growth in many countries," the OECD report said. "In some cases, low earners have even seen their incomes fall in real terms. When such a large group in the population gains so little from economic growth, the social fabric frays and trust in institutions is weakened." 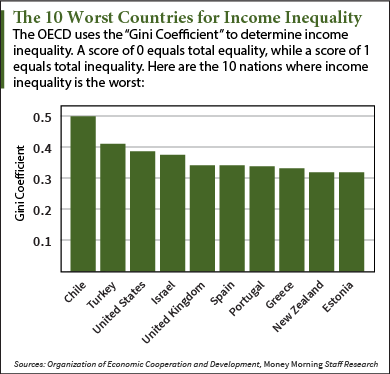 According to the report, the wealth gap isn't just a problem for the bottom 10%. Income inequality can have a major long-term impact on a nation's economic growth.

"High and often growing inequality raises major economic concerns, not just for the low earners themselves but for the wider health and sustainability of our economies," it said. "Put simply: rising inequality is bad for long-term growth."

One of the way the OECD says the issue can be remedied is increased education and skills acquisition among the bottom 10% of earners. But of course, that's not an overnight fix.

According to Money Morning Capital Wave Strategist Shah Gilani, one of the biggest causes for the massive wealth gap in the United States is the Federal Reserve's Quantitative Easing program. The program has been ruinous for the economy, the bond market, and the stock market.

But there's a way you can turn this "disruption" in your favor - and even profit from it...continue reading here to find out how...

The wealth gap is described in terms of income but whe three year survey data on family wealth is even worse. The top 10% increased their share from 67% to 75% since 1995. The next 40% (the middle class) is down from 27% to 24%. The sick part of the survey is that the poorer half of the population (62 million families) is down 70% and now shares just 1% of the wealth.
It is worse on a global scale with the top 10% having 87% of the wealth and the middle class having just 12%. The strong U.S. middle class can expect to trend down more rapidly while the poor seem to have hit bottom.

I know from reading the WSJ that 93% of all American households in 2013 had less net worth than I have at present. This remains true today. Most people have little financial assets and must live hand-to-mouth. They are really nobodies, so to speak. They never will have what I have no matter what they do or how hard or how long they "work".

I am very grateful but feel little remorse about the other 93% of all Americans. Its not my problem. I have little in common with the public and increasingly, will interact with fewer and fewer people as I age. That is the way life is as you get older and retire, as I am. The next generation ( millineals) can try their collective luck when they get their turn to run the country. I don't much care anymore. What will be will be.

People like H. Craig Bradley express the abysmal ignorance of the economy, and its dire consequences. It is a simple case of supply and demand, and as the demand among the middle class increases, because their income is DECREASING, and there is no opportunity to satisfy this demand, then we have a situation almost identical to France in the late 1700's.

The aristocracy of Louis XVI had drained off such huge amounts of French capital, not only from the peasants, but also from the lower nobility and merchant classes,(bourgeoisie) that the social situation became intolerable. By convening a States General Assembly, not seen since 1614, the King and nobles were confronted with a militant group of representatives in no mood for further aristocratic privileges. When the alarmed King surrounded Paris with troops , and tried to dissolve this major National Assembly, the bursting point was reached on July 14, when the armed peasants stormed the Bastille prison. The rest is in all the history books of the world.

If there is not a MIRROR image of that happening in the USA today, then most people have their heads stuck in the ground. With wealth becoming increasingly concentrated in 1% of the population, owning < 75% of the national wealth, the 99% are becoming a very angry lot. Unless rapid legislation is enacted to staunch the flow of money to the top, and redistribute some of that wealth to the middle and lower classes, it is inevitable that the US will have to suffer its SECOND revolution – this time another Civil War.

its so obvious..slavery for all:-)

http://ow.ly/Nrsji Think you're important because you have money? Think again, #PopeFrancis says #Catholic

Surely the quantitative summary of the situation, as presented above, could be criticized for omitting any consideration of the fact that the "bottom 10%" in the US are far better off than the corresponding people elsewhere today.

Would it not help our understanding if we considered the similar fact at the time of the French Revolution?

So while nobody disagrees with the obvious, hardly newsworthy point that there is a qualitative similarity in the situation today, is it quantitatively, truly "almost identical to France in the late 1700's"?

If the calculation of the dangers today took these considerations into account, then would revolution in the US not be seen to be far less likely today than in other countries?

IGNORANT ABOUT THE ECONOMY ??

If you think the American Middle Class is being squeezed with flat household wages for the past 6 years then look out. We have been building-up quite a national debt, as well as Corporate debt ( share buybacks ) and consumer debt (more subprime auto loans ).
http://video.pbs.org/video/1099844054/

Today, there is more sovereign debt than there are wage earners and producers to service it all, which means in theory, there should be "deflation" ( across the board ). Yet, that does not seem to be the case as far as retail and service sector price increases in recent years. Central bank policy keeps the system inflated and aloft, for now anyway.

Can Martin tell me how in the world we can HOPE to avoid either future Federal tax increases or new Federal taxes, such as a National Value Added Tax ( National Sales Tax ) after the next President is elected. Its coming, either way. So, you are a target if you have any cash. Believe it !

A run on the banks as already begun amongst the first movers such as the State of Utah ( precious metals lawful to settle debts) and Texas recently passing a law to establish a Texas Gold Bullion Depository in which the Texas State Pension fund will store its physical gold bullion holdings ( 15% ) of the pension valuation as a hedge.

Adding to this trend away from the banks is the recent development of digital gold backed Bitcoins, as well. Gold or silver backed money is coming and the U.S. Paper Dollar is on the way out, as are many of our banks. It will be an exciting and interesting ten years ahead. "Storming the Bastille" this time won't yield any rewards or free the peasants (serfs) from their state of slavery. Interesting times.