The Dow Jones Industrial Average today faced its fourth straight day of declines! The Dow is down 0.35% for the year.

For June 9, 2015, here's how the DJIA/S&P 500/Nasdaq did today, the top stock market news, and stocks to watch based on today's market moves… 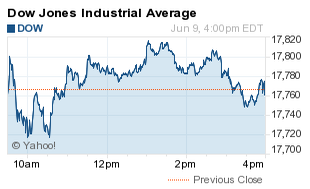 The DJIA today was down a meager 2.5 points. The Dow was positive just seconds before the trading session closed, but fell into the red in the final moments.

Investors were trading based on sentiments regarding the recovery of bond yields, expectations for a rate hike, rising oil prices, and the ongoing drama over Greece's debt negotiations.

What Moved the Dow Today?