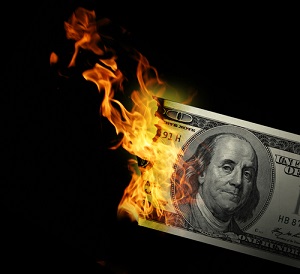 It is a common misconception that the Federal Reserve can protect against a U.S. dollar collapse.

In fact, there is no "safety blanket" for our currency.

In November 2008, under former chair Ben Bernanke, the Fed began printing money - aka buying government securities - to "save" the economy. This bond buying would presumably create economic value. The goal was for new money to swell banks' reserves, encouraging them to make more loans. Increased lending would boost investment and stimulate growth.

So through a policy called quantitative easing, the central bank bought $4.5 trillion in Treasury securities, mortgage-backed securities, and other assets until QE was halted in October 2014.

But the Fed's QE didn't have the intended effect.

As a result of QE, the Fed's balance sheet has increased more than fivefold in the last seven years. It owned more than $4.5 trillion in assets as of March 2015, compared to $870 billion in 2008. 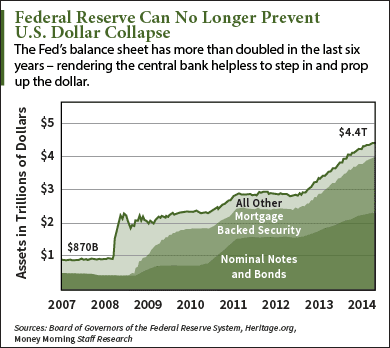 Instead, all this bond buying has had one massive consequence: The Federal Reserve devalued the U.S. dollar.

However, if you run the numbers the other way, using 2010 dollars, a very different picture emerges...

In fact, every year you have a paycheck that doesn't go up, you're actually getting a pay cut.

Former congressman Ron Paul famously wrote about the Fed's ever-multiplying balance sheet - and how it has destroyed U.S. dollar value - in his Sept. 16, 2009 book End the Fed.

"The Fed is using all its power to drive the monetary base to unprecedented heights, creating trillions in new money out of thin air. From April 2008 to April 2009, the adjusted monetary base shot up from $856 billion to an unbelievable $1.749 trillion. Was there any new wealth created? New production? No. It's as if we still believe that money can be grown on trees, and we don't stop to realize that if it did grow on trees, it would take on the value of leaves in the fall, to be either mulched or bagged and put in a landfill. That is to say, it would be worthless."

The reality is, neither the Fed - nor any safety net - is in place to prevent a U.S. dollar collapse. What makes that fact more disturbing is that this is only of five dangerous catalysts that currently threaten to bring down the dollar. Click here to find out what these other catalysts are - and what will happen after they are all triggered...

Your wrong. The so called "federal" is no more federal than federal express. It was ILLIGALLY established when there was not even minimum quorum and the purpose was (and is) to control the financial system. One of the bastards founders, Rostchild (can't remember his given name) declared in those times: "I don't care who has the army, I want control of the money, and I'll control the country, entirely"
Follow the money and you'll find out…
Oh, and read history if you are one of the few literate in US…

What nonsense. The purchasing power of the dollar has remained remarkably constant (no inflation) and the exchange rate of the dollar, its value in terms of other currency has gone up. The author needs to read a good high school book on how the economy actually works in the real world and give up the silly and hopelessly inaccurate theories.

J b
Reply to  Martin Archer

Realistic angle family home cost $5000 in the forties, $20,000 in the 1970s, 120,000 in the 90s. Look at family cars and prices over the same time. You'll see similar price increases and don't give me that higher quality BS argument price increases of 10-20times isn't just quality it's the loss of dollar value. A double cheese burge used to be on the dollar menu at McDthen we go the McDouble less cheese now the McDouble is $1.49. In just a few years that is loss of purchasing power. Also known as inflation. And YES I teach economics.

Food prices are higher and higher. I'm glad you telling us there is no inflation

The Federal Government and their media lackeys continually repeat the assertion we have no inflation, inflation is low ( 2%) or even more laughably, "disinflation". Everyday consumers should recognize "bunk" when they see it, if not when they hear it.

The public is blind and dumb and believe the drivel. Home prices is quality urban markets are way up too, as is vacation properties in Mountain Resort towns, as well. The "money illusion" is that your dollar is worth anything these days. Its not and our standard(s) of living are being forced down all the time. ( We are becoming poorer).