To find out why the Dow rose today, and to get the top stock market news and stocks to watch based on today's market moves, continue reading… 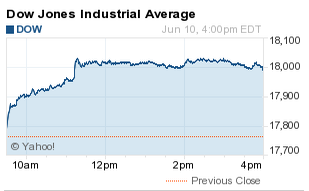 The DJIA today was up 236 points this afternoon on news that Germany may be content to allow Greece to commit to one economic reform in order to obtain much-needed aid.