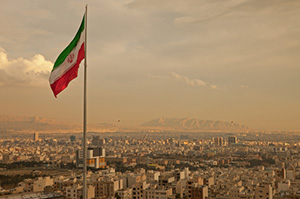 The U.S. is waging a dangerous financial war with Iran right now.

And if it's not managed carefully, it could embolden the dollar's enemies to mount a counterattack on the U.S. currency.

Such a move could destroy the U.S. dollar as we know it.

You see, the dollar maintains its value as a reserve currency because global demand keeps it that way. As long as the world needs dollars to settle international transactions, it's only going to continue to stay strong against the world's currencies.

But the U.S. Treasury sees the dollar as more than a means to settle international transactions.

It's also a weapon.

As a weapon, the dollar can be used to destabilize rogue nations and inspire regime change.

Or so the Treasury thinks...

Right now, the financial war being waged by the United States is not toppling our adversaries. It's strengthening them...

In its effort to bring on the collapse of the Iranian regime and curb that country's nuclear ambitions, the U.S. Treasury set its sights on demolishing the Iranian rial.

As U.S. Treasury official David Cohen said on June 6, 2013, the United States is seeking "to cause depreciation of the rial and make it unusable in international commerce."

After freezing Iran's account at the U.S. Federal Reserve in 2012 and pressuring Belgium to prohibit Iranian transactions in the international SWIFT payments system, the Iranian economy was devastated.

Without access to international payments systems, Iran struggled to receive dollars for its oil exports.

Nor could it use dollar proceeds from oil exports to pay for imports.

This sparked a massive inflationary period for the rial and a run on Iranian banks.

But in locking Iran out of the dollar payments system, the United States had to face the ugly reality underlying this financial war: The dollar is not as effective a weapon as the U.S. Treasury thinks.

Instead the U.S. drove Iran into the arms of an international triumvirate seeking to dismantle dollar hegemony. Iran leaned on India, China, and Russia to circumvent the international dollar payments system.

India swapped gold for oil with Iran. Iran then used this gold to buy food and manufactured goods from China and Russia, in their efforts to stockpile the yellow metal.

The ease with which these four nations can settle international transactions without the dollar reveals a terrifying development in the global financial order...

The dollar is not the only weapon in financial war. And its potency is slowly being eroded - by gold.

"The United States had wanted to drive Iran out of the dollar payments system," Jim Rickards, the Financial Threat and Asymmetric Warfare Advisor for both the Pentagon and CIA wrote in his 2014 book The Death of Money. "But in a case of 'be careful what you wish for,' an alternative non-dollar-based payment system is now taking shape in Asia, and gold has proved to be an effective financial weapon on its own."

But this financial war does not start and end with Iran...

Iran is simply a small part of much more far-ranging global effort to undermine the dollar's role on the international stage. What is starting with Iran portends a financial collapse of a magnitude we've never seen before - one that has the potential to wipe out $100 trillion in wealth... continue reading here to find out how this meltdown will play out and how you can protect yourself...

If you'll do some research you'll find that Iran was advocating for an alternative to the dollar system well before the turn of the millennium. As early as 1993 Iran was communicating that the dollar system bound them and other oil producers in a market over which they could not exercise full control. it might have been this call to other middle eastern oil producers to attempt to move away from the dollar that led to grater interest in the Iranian nuclear project which had been initiaited by the Shah and was being assisted by the Russians, and the eventual animosity and imposition of sanctions. It was the nuclear situation, posited as the reason for having to cripple the Iranian economy, and not its position as an oil producer, although that was a very tangible target for the sanctions process that was predominant in the rhetoric. What seems obvious is that ,rather than bringing the Iranians down, the sanctions program has insulated Iran from the world banking system and its self-inflicted woes. Iran has had to look inward, and to alternatives, to supply its basic needs in a host of industries. It's stronger now, in this regard, than it was before. And the notion of returning to the dollar system and world banking is one with which it will l take care.

Whether there is a nuclear deal now, or not, Iran seems to have won it's struggle with America and the west. There will have to be a lot more in it for Iran to move on in any positive way. Like the Cubans – 50 years of playing wolf isn't erased with a new Granny outfit.

IF, anyone should believe that Iran has won its struggle with America and the West by evading the economic problems created by sanctions, then it would have to be explained why Iran' is so desperate to see any agreement it formally sign on its nuclear enrichment programme, is met by an immediate lifting of wide ranging sanctions especially its biggest revenue earner seeling its oil to other countries. Whatever, one might think of the present US Administration, with the Republican hawks looking over its shoulder, it is not going to get away with lifting sanction before the Iranians are seen to be actively engaged in full compliance for at least 6 months. India's PM Narendra Modi, is not going to jeopardise his government's achievements made during its first year in office, by risking a multi billion trade deal with America. A deal the Iranians are seeking to stymie by playing hardball over India's hopes of getting approval for the building of a new port on Iran's coastal border with Pakistan(where it has already invested $100m), with the goal of developing an overland trade route with China. America,might be thought as being dumb, but only the foolhardy would underestimate it economic power.In addition, any member country in the P+5 team, who believe Iran is not developing a nuclear weapon despite secretly building deep underground installations in violation of the Non Proliferation Treaty, which Iran is a signatory to, needs its head examined. Moreover, there is a new and very experienced new sherriff in town representing the UN IAEA, who is not going to let Iran off the hook on any agreement its signs.

Whilst an agreement over Iran's nuclear enrichment programme is a seperate issue, no American administration current or future isgoing to ignore the proven fact that Iran is deeply involved in backing rebels in Yemen if not also and meddling in the affairs of the Sunni led Iraq government..

Ok it's 6 months later and the US is still playing chicken. lol