Here's what the Dow Jones Industrial Average did today, June 11, 2015… 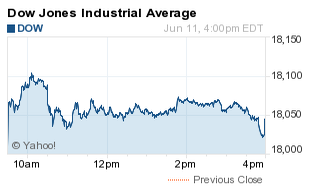 Shares of Eli Lilly and Co. (NYSE: LLY) gained more than 4% on news that one of the company's drugs surpassed goals in two phase 3 studies.