HAL stock has surged 5.4% this quarter despite coming off the energy sector's worst earnings season in years due to crashing oil prices.

According to FactSet, Q1 earnings across the sector saw an average year-over-year decline of 64.4%. That's the largest loss out of all 10 sectors on the S&P 500.

That's been a huge win for HAL, which is one of the few large oil stocks trading up so far this year.

How Does the Halliburton Stock Price Compare to Other Big Oil Stocks? 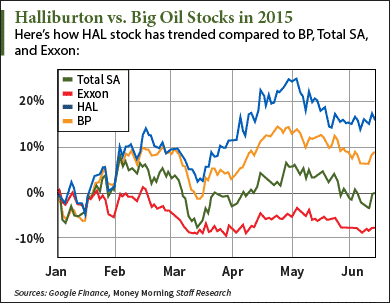 These companies – or "supermajors" – include BP, Total, and Exxon.

BP was the first Big Oil company to release Q1 earnings on April 28. Since then, BP stock has dipped 4.7%.

Meanwhile, Exxon and Total SA have slipped 8% and 0.3% this year. Exxon — the world's largest publicly traded oil company — saw a 46% earnings loss and a 36.7% revenue loss. Total's earnings were 48% lower than last year's earnings of $1.46 per share.

It's clear Halliburton is more profitable than most of the supermajors right now. The 38% drop in WTI oil prices over the past year has hurt the exploration and production firms more than oilfield service (OFS) companies.

But does that make Halliburton stock a buy?

Should I Buy at the Current Halliburton Stock Price of $45.60?