The Alibaba Group Holding Ltd. (NYSE: BABA) share price traded up slightly this morning after the company announced it will launch its own video-streaming service in China. BABA shares climbed to $87.17 shortly after the opening bell.

The service will be known as Tmall Box Office or TBO. According to Reuters, it will offer a mix of in-house and third-party content, similar to Netflix Inc. (Nasdaq: NFLX). 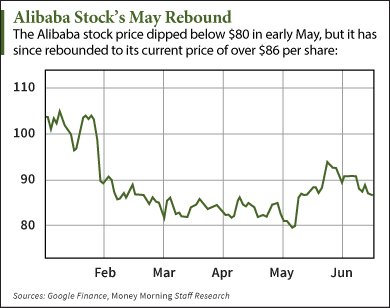 The service will include content from China as well as foreign countries. TBO's launch is expected within the next two months.

Roughly 90% of the content on the site will be purchased by users through a subscription service or on a show-by-show basis. The remaining 10% of content will be offered for free.

This week's announcement is the latest in a string of moves Alibaba has taken to enter the entertainment business.

Last week, Alibaba shares climbed to $91.60 after the company announced it would be raising new funding for its entertainment company, Alibaba Pictures. Before that, Alibaba officials announced they'd spent $200 million to acquire a 30% stake in China Business News, a financial television and newspaper company.

Both moves are part of Alibaba's larger vision of creating a global brand with influence in numerous industries.

During the IPO process, Founder Jack Ma told investors his plans to build a global powerhouse.

"We want to be bigger than Wal-Mart," Ma said the day of the IPO. "We hope in 15 years people say this is a company like Microsoft, IBM, Wal-Mart; they changed, shaped the world."