The Stock Market Is Down Today: 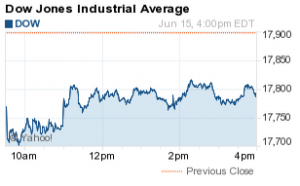 The DJIA today fell more than 107 points as investors sold on fears and frustration over Greece's inability to address its debt obligations. Over the weekend, Greece and its creditors failed to fashion an agreement that would ensure the nation could meet its debt payments to the International Monetary Fund. The news sent global markets tumbling and has investors on high alert over Europe's economic future. The news overshadowed anticipation for tomorrow when the Fed Open Market Committee begins its two-day session on monetary policy.