How did the Dow Jones Industrial Average do today? Let's take a look… 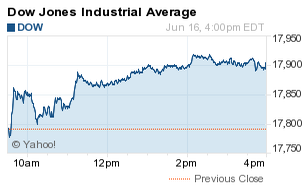 The DJIA today ticked up 113 points as M&A activity picked up again.

Investors largely cast aside rate concerns as the Federal Open Market Committee kicked off its two-day meeting on monetary policy.

Investors also continue to monitor the now-increasing likelihood of a Greek default on its debt to the International Monetary Fund.

The Stock Market News to Know