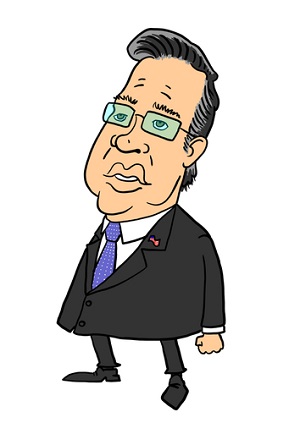 After months of not-officially-campaigning, the former governor of Florida Jeb Bush finally threw his hat into the 2016 presidential race on June 15.

You see, some political lawyers and strategists claim the former Florida governor has pushed the limits of political fundraising too far...

Bush has said for months now he was simply "testing the waters" and "exploring a run."

According to a June 3 New York Times story, "Federal law makes anyone who raises or spends $5,000 in an effort to become president a candidate and thus subject to fund-raising, spending and disclosure rules. Greater latitude is allowed for those who, like Mr. Bush, say they are merely 'testing the waters' for a possible run."

Karl J. Sandstrom, a campaign finance lawyer who served on the Federal Election Committee, pointed out what he believed was Bush's abuse of the semantics of election restrictions. Federal legislature states that once a candidate has announced his or her bid, the $2,700 contribution limitation and ban on PAC/Super PAC coordination goes into effect. Bush took his time announcing his bid so that he could stay in close contact with his "Right to Rise" PAC and Super PAC.

So what are the funding tactics in question, and just how much money has Bush raised?

What’s the Difference Between a PAC and a Super PAC?The chief difference between a PAC and a super PAC is limitation.PACs – political action committees – have been around since 1944. There are restrictions to what PACs can donate in campaign and party contributions. The amount of money PACs can give per election is capped at $5,000 per candidate. Additionally, PACs can give no more than $15,000 each year to a national party. PACs can be made up of individuals, corporations, or unions, and they can donate money directly to political candidates.But on July 22, 2010, the Federal Election Committee (FEC) green-lighted Super PACs. The move all but eliminated PAC financial donation limitations. Thanks to the FEC ruling, individuals, corporations, and unions can now contribute an unrestricted amounts of cash to a Super PAC.

The main limit placed on Super PACs, aside from having to report their expenditures and contributors to the FEC, is that they cannot coordinate directly with the campaign staff of individual candidates.

Even though Super PACs must report their contributors to the FEC, they do not have to make them known to the general public. In 2010, a Super PAC set up for a primary U.S. House of Representatives candidate consisted of just a single donor. But because this donations were made via Super PAC, his or her name was never disclosed. This what some campaign finance lawyers call “the Russian Doll problem.”

One campaign funding tactic Bush has allegedly been using is an incentive-based challenge.

Bush is asking top campaign fundraisers to collect $27,000 prior to June 30 in an effort dubbed the "27 in Fifteen challenge," a campaign official confirmed to CBS News' Julianna Goldman on June 8. In return for meeting the goal, contributing fundraisers will receive perks like invitations to a two-day retreat at the Bush family compound in Kennebunkport, Maine, in July.

Bush also has been raising gobs of money for his Super PAC for months.

On Jan. 9, Bloomberg Politics reported that Bush's fundraising machine was looking to raise an ambitious $100 million. The Super PAC originally planned to make this staggering amount of cash over the course of three months; however, the deadline has since been pushed back to the end of June.

This intimidation tactic of mounting a massive fundraising haul dissuades primary rivals from entering the race. Jeb's brother, then-Texas Gov. George W. Bush, did the same thing in his 2000 presidential campaign. He raised a total of $66 million dollars in 1999, which pressured challengers to end their campaigns.

The Right to Rise Super PAC's haul is purportedly so large now that Jeb Bush asked donors (prior to his bid announcement) to limit donations to $1 million dollars, according to an April 27 report from The Tampa Bay Times. While the exact amount of money harvested by the political action committee is not known, the target was confirmed by GOP sources involved with Bush's fundraising operatives.

And according to a June 25 article from Salon, Bush let his Super PAC handle too much of his campaign. In doing so, Bush made it clear to deep-pocketed donors they needn't worry about how and where their money was being spent. For instance, if a wealthy donor wanted to gift Bush $50,000, he or she could donate directly to the Right to Rise Super PAC. It was as good as gifting directly into the presidential hopeful's campaign, but with the perk of skirting transparency laws. Folks could give as much as they wanted without the threat of condemnation.

You see, now that Bush officially announced his presidential bid, the fundraising rules he must follow have become much more stringent.

For instance, all communication between the former Florida governor and his Super PAC must cease, by law. Per the FEC, political candidates and their political action committees cannot communicate once the candidate has announced his or her bid.

And all those donors with deep pockets that were contributing to the Super PAC now face donation caps and must self-identify.

So with all this planning, just how large is Bush's "war chest"?

A June 10 Politico article quoted Jeb Bush's campaign funding total currently to be around $87.3 million, stating this knowledge came directly from someone associated with Bush's party. And a Feb. 13 Washington Post article entitled "Bush Blows Away GOP Rivals with 2016 War Chest" revealed how Bush has managed to dominate in the race of financial backers. That's because he has managed to impress bigtime Republican money donators for his Super PAC who once backed the likes of Mitt Romney, George W. Bush, and George Bush Sr.

The FEC doesn't require candidates to report their receipts until July 15.

But considering Bush's massive trekking all over the United States in recent months to raise money for his PAC and Super PAC, it must hold an arsenal.

More Than Her Millions: The sum of all Carly Fiorina's net worth is $59 million - a whopper compared to that of the average American. But in spite of her wealth, Fiorina claims to understand folks like you and I better than her opponents. But is that even possible considering her ridiculous net worth?

These Super PACs are EXACTLY what is wrong with this country! Their money has corrupted our democratic society! Shame on you for writing this article with a tone that condones this atrocity! Citizens United is the worst decision SCOTUS has EVER made!