How to buy gold has taken a big leap into the digital age, thanks to something called HayekGold.

HayekGold is a way to buy and store physical gold with the security and ease of transfer of the Bitcoin network. 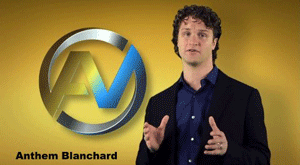 "We're taking the world's most trusted store of value through most of history and coupling it with the world's most innovative method of exchange and ledger of trust," Anthem Hayek Blanchard, the CEO of online precious metals retailer AnthemVault and the mastermind behind HayekGold, told Money Morning.

The HayekGold token is a digital representation of stored physical gold, which resides in a vault in Salt Lake City. AnthemVault sells customers the gold it then stores in the vault.

Each HayekGold "crypto-token" is linked to the Bitcoin blockchain – the digital ledger that verifies and stores every Bitcoin transaction.

The advantage to creating a crypto-token to represent physical gold – Blanchard says each one will always equal the value of one gram of physical gold – is that it is liquid and spendable.

"You can send the digits that represent ownership at the speed of light with the military-grade security of Bitcoin," Blanchard said.

The link to the digital world also means many customers can own pieces of the same gold bar. But Blanchard emphasized that this "fractional" ownership is not hypothecation — the re-selling of the same gold to two or more customers. "This is one-to-one ownership," he said.

Blanchard views HayekCoin as one answer to a "lack of innovation in banking for hundreds of years" and says it represents a better alternative to fiat money printed by governments.

"Currency has outperformed gold as a means of exchange because of convenience," Blanchard said. "But HayekGold eliminates that advantage, allowing individuals worldwide to fundamentally rethink how they use money and protect their assets."

Just how "spendable" HayekGold is remains to be seen, but thanks to AnthemVault, the infrastructure exists. Eventually, Blanchard plans to create a Hayek-based debit card to enable retail spending.

This is how to buy gold not just for the yellow metal's traditional store-of-value benefits, but to gain the ability to spend what you have or send it across borders to a party in another country.

Gold has never had this kind of flexibility before…

Interesting look at crypto currency. It is something most investors should get into. It could easily spike in value!

Using crypto-tokens to represent gold is awesome. That way, you could save your gold in a safe place. It reminds me of going to the casino on my cruise. I changed money into chips to use there. Do you think that these tokens will replace dollars?

I doubt they'd replace dollars. There wouldn't be enough gold to back the tokens needed. That's why the U.S. went off the gold standard. But for those suspicious of fiat money, this is a compelling alternative.

I feel like buying gold now is a lot easier than it was in the past. You can go online and buy it and you can also go to different places where they sell it on the streets. I think I would go to a gold trusted site to make sure that nobody tries to sell me fake gold.

Good article and it is good to see people aggressively pushing gold as money again. Bitgold in Toronto is doing exactly what this Hayek guy is doing, since May 2015. In fact, they bought Gold Money in July and James Turk is on the Board. Further, with Bitgold, there are no minimums, priced at 1% over spot, you own the gold and store it for FREE at any of 10 vaults worldwide, in your name, not 100% backed by kilobars, like with this guy. You can send and receive gold or any currency worldwide for FREE, and it comes with… Read more »