Investors considering gold or silver as an investment or hedge need a good handle on the factors driving their prices.

That's where supply, demand, trend, and sentiment data come in.

With global economic and market factors painting no clear picture about the near-term prospects for many investments, many of you might be considering whether it makes sense to add gold or silver to your portfolios.

To help you decide, here's my take on the direction of gold and silver prices in the second half of 2015.

A Look at the Direction of Gold

Gold commands and dominates the precious metals space, so that's where we'll start. 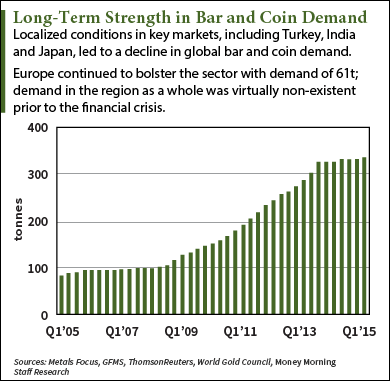 In Q1 global demand was nearly flat, down just 1%, or 11 metric tons, from 2014, according to World Gold Council (WGC) figures.

European physical gold demand got a strong 16% boost, thanks likely to Grexit fears and the Ukrainian conflict, while Asian physical demand faded.

Central banks have remained conspicuous net buyers, with the current trend now stretching into 17 consecutive quarters. Russia was the standout, adding more than 30t in Q1.

On the other side of the equation, gold supply was up 2% or 16.7 metric tons. The growth has come from select Asian, North American, and African mines. But the WGC expects that the second half of 2015 will be different, with gold mine production leveling off.

I expect that the effect of the last couple of years of persistently weak prices will finally kick in, causing flat or lower output just as prices are near a bottom.

As for sentiment within commodities, gold ranks as one of the least favored, making for a great contrarian indicator. Essentially, the bulk of investors are close to abandonment levels. Sentiment towards gold stocks is also at extreme lows, and the ratio of the gold price to gold stocks also points to bottoming behavior.

We saw gold prices bounce strongly in January, peaking at $1,300 from $1,140 lows in November. That too fizzled into mid-March as the price reversed, bottoming around $1,150. Since then, it's been a mostly sideways move around the $1,200 level. Technically, the gold price has continued to meander within a channel, roughly between $1,170 and $1,210.

So what might we expect in the second half of 2015?

Will the Yuan be accepted as part of SDR of the IMF in October? The US will clearly fight it but can't indefinitely deny reality. This will coincide with an announcement of how much gold really holds. This could be significant to the price of gold.

If China becomes part of IMF, I don't think they will publicly announce how much Gold China has. That'll drastically kill the dollar, and China holds about 4 trillion dollars in treasuries.

Your near term expectations are interesting and your thoughts are appreciated.

What do you think silver and gold will be doing longer term (1-2 years and 3-5 years) after the feds have increased rates, the Chinese currency has gained world recognition and other things being projected by Money Morning have happened or have started to happen?

I am confused about your break down of the uses of silver? There is nothing left for investment or the possible hundreds of millions of ounces that may be held by JP Morgan or other banks?

Additionally, I have seen on several sites the 1/3 or so of silver that is being sucked into India, is that number included in your break down of "65% industry, 23% jewelry, 6% photography, and 6% silverware".

It would appear that either the amount of silver being mined is more than reported or there is more residual silver still out there floating from the past 10,000 years of mining, than is guesstimated?

If someone could help me with my math, I would most certainly appreciate it?

Thanks, take care, God bless and have a great day, respectfully, JEFF

they appear to be talking actual usage. Investors do not use silver they store it for future use. Sure they may store it in bars or coins but if prices spike and usage cries for silver bars and coins are melted for usage. India would be included in the usage as they actually use it.

You won't come to any meaningful conclusions as to the direction of a rigged market by looking at supply/demand fundamentals, especially when the numbers you're analyzing are supplied by the World Gold Council, the propaganda arm of the gold suppression cartel.

No one who knows anything believes what they say. They're completely corrupt.

Gold and silver will go where the manipulators want it to go until they're either forced to cover their shorts or they decide to abandon the suppression effort. Neither of those seems imminent, but ya never know.

The most laughable thing is relying on the charts for anything other than very short term signals. The cartel members have painted the tape. You're seeing what they want you to see. The charts aren't artifacts of the forces of supply and demand as they "discover" a price at which those forces balance. They're the tiretracks of markets that have been run over. They're the evidence of a crime in progress … a crime the "cops" at the CFTC will never honestly investigate, much less put an end to.

Come on Peter, you're better than this.

I agree wholeheartedly. Gold and silver prices are rigged and are a joke. Silver is now selling for $7(?) below mining cost.
Sooner or later the metals will break loose to a realistic figure.

Silver now controls the bio-med, electronics, and solar industries without which they would shut; regardless of price so who cares, as it's we the consumers who pay for every oz. or silver would never be used for anything. As far as silver's price being constrained via manipulation, the Silver Users Association can be heard applauding dear reader can you hear them?

Gold will move first then silver, I look for Gold at $1300 to $1350 by the time the December contract goes off the boards.

I have been in both metals for 20 plus years. I predict that none of you posting today are correct! I believe that a storm is brewing in a neighborhood near you and when it gets here its gonna be bad news for 98 percent of america. I personally hope the price continues to spiral as I will buy,buy,buy. Time is a resource too! Hence use it to your advantage now as it may be in short supply?

Peter, I often see technical breakdowns of gold/silver fundamentals, but I have to ask if you believe they actually apply any longer. Or, is the lending of billions to Goldman and friends at 0 % to manipulate (naked shorts) the real indicator to watch….. ? Seriously, if funadamentals still worked, what would the actual value of gold be ?