The turmoil in Europe over whether Greece will be forced out of the Eurozone has been a growing concern for investors as the crisis has worsened in recent weeks.

Sure, politicians and Greece's creditors might find a short-term solution any day now, but we all know what happens when you "kick the can" of debt down the road… the problem usually gets worse.

Most Greeks want their country to exit the euro, but I don't believe they fully understand the consequences of that. Yes, it will get the International Monetary Fund and the European Central Bank off their back.

But it will also cause shortages of essentials, rising prices, and further economic pain for the average Greek. This could lead to civil unrest.

If the "Grexit" does take place, there's a good chance investors around the world will look for safe havens. There is one that could be poised to rise in the coming weeks, even if Greece's problems do not come to a head. In that case, I'll show you a way to double your money.

And if Greece does implode, the trade will be even more profitable…

Gold Could Rise or Rocket Depending on Greece

If the Grexit crisis escalates, one safe haven investors will consider is gold. The yellow metal has been languishing lately. Since February of this year, the SPDR Gold Trust ETF (NYSE Arca: GLD) has been stuck in an 8-point trading range with support at 110 and resistance at 120. This is the tightest range in years.

What is it going to take to get this metal on the move again? Well, a major Eurozone catastrophe could do the trick. But even without that, as Money Morning Resource Specialist Peter Krauth noted yesterday, there are reasons to believe the coming months will be profitable for gold investors. 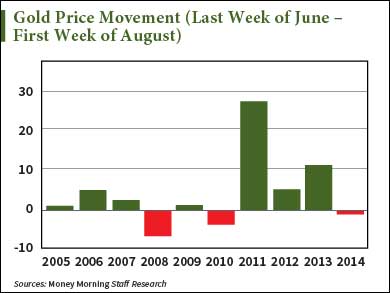 Let's look at the Money Calendar for some clues…

At left is the data for GLD's performance from the end of June into the first week of August over the last 10 years.

In seven of those years, the price of gold and GLD have moved higher. The increases outpaced the moves lower by a rate of greater than 2:1. That means not only did the price move up more often than not during the summer, but the amount of the increases were greater.

What could we do to take a position in GLD and create a built-in stop to protect us in the event that we are wrong about GLD's prospects over the next 30 days or so?

Well, a call option on GLD makes perfect sense, and here's why.

So how much are we talking to "rent" this position, using call options, into August?

Well, first of all, most Greeks would like to stay in the Eurozone and keep the Euro. Estimates range from 70% to 80%.

So, you're off to a bad start.

Second: Greek debt is either held by the IMF or ECB or has been transferred onto the books of the ESFS. Private entities hold less than 12%. If you hadn't noticed, those quasi government entities can conjure money from nothing. And they had months/years to prepare for the stress that would be imparted to the system by a Greek default. So, where exactly would the panic to buy gold come from should Greece actually default?

Third: The gold market is the most rigged market on the planet after silver. Price is determined almost entirely by what the cartel … the manipulators … choose to do. Do they conduct more bear raids? Do they continue to sell naked short into rallies to cap them? Those are the real questions.

The charts are useless in a rigged market. All they reveal is evidence of a criminal conspiracy to suppress the price. If you're predicating trading decisions based on chart patterns in this market, you've been hoodwinked by JPM, HSBC, et al. You're doing what they want you to do. They use the charts to trap the clueless.

Fourth: Greece isn't gonna leave / be allowed to leave the Eurozone/Euro. This will be a political decision, not a financial one.

The reason to buy gold NOW is that the COT structure has tuned bullish again, not some Greek connection. But that's a short term trading signal. There's no reason to believe the manipulators won't cap the next rally and slam it down again.

The smart move is to accumulate some gold a day or two after every smackdown and simply hold it … and not via GLD, which is in on the suppression scheme. That's still a version of paper gold. Not as bad as a Crimex contract, but it sure isn't gold in your possession or non-bank storage.

Where can I buy a call option in GLD stock for usd.298? 100 shares? Kindly send details..
Thanks

Thanks for the post. GLD the Asset is currently trading around 113.50, meaning if you want 100 shares, your gonna have to pay about $13350 USD plus commissions. The article above describes how to "Rent" GLD for the short term (60 days) by using options. Options are designed by nature to offer a buyer a lower cost and risk alternative while also offering leverage vs the cash equivalent. Re-read the article again, it explains this in more detail. Cheers – Tom