Airbnb Inc. is reportedly in talks to raise $1 billion in venture capital according to The Wall Street Journal. That amount of funding would value the tech startup at roughly $24 billion.

Unfortunately for investors, that means the Airbnb IPO date will be pushed back again.
Airbnb is an online rental service that allows homeowners to list their homes and apartments for short-term stays. The service is available in more than 190 countries. More than 35 million guests have used the service since its founding in 2008. The site also has more than 1.2 million listings. 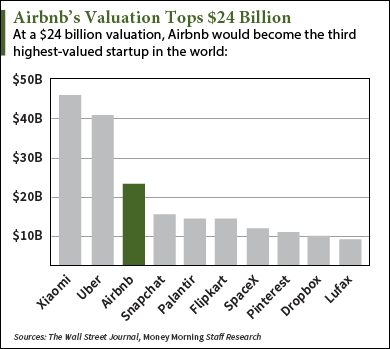 The company is growing at an incredible rate. In April 2014, Airbnb was valued at just $10 billion. At $24 billion, Airbnb would be the third highest-valued startup in the world.

The company hasn't commented on who's behind this latest round of funding. Airbnb has previously been funded by Sequoia Capital and Andreessen Horowitz.

Airbnb generates revenue by taking a 3% fee from every booking. Service fees between 6% and 12% are also applied to each guest.

According to The Journal, Airbnb representatives said they expect $900 million in revenue for 2015. In 2013, the company had revenue of just $250 million.

They also expect revenue of $10 billion by 2020. At that point, the company will have earnings of more than $3 billion. The company isn't profitable yet though and expects a loss of $150 million in 2015.

To put those numbers in perspective, one of the world's largest hospitality companies, Priceline Group Inc. (Nasdaq: PCLN) expects revenue of $9 billion this year and has a market cap of $60 billion.

"We're still very much in the early days of travelers being aware of and considering Airbnb for their next trip," Lodging Advisors LLC's Sean Hennessey told The Journal. "They could achieve a sizable amount of market share as the market grows and as their mind-share grows."

While the expectations for Airbnb's growth are enormous, there are still two major problems that the company needs to sort out as the Airbnb IPO date approaches...