The Obamacare ruling in the King v. Burwell Supreme Court case is expected this week. It's a decision that could impact more than 7.5 million Americans.

King v. Burwell asserts that Affordable Care Act (ACA) subsidies only apply to citizens who purchased their insurance over a state-run exchange.

You see, most states run their own exchanges that allow citizens to sign up for insurance through the state.

However, more than 20 states boycotted the exchanges. Individuals in those states had to rely on federal exchanges. And those states are the ones directly in the crosshairs...

What the Obamacare Ruling Means for You 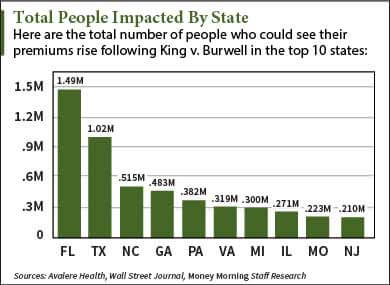 "Here's what you need to know - millions of people who would be required to buy health insurance couldn't afford to do so," Money Morning Chief Investment Strategist Keith Fitz-Gerald said. "They still can't. So Obamacare's drafters included subsidies in the law, allowing millions of poorer Americans to gain insurance and avoid the hefty fines Obamacare would have otherwise dealt them."

If it's determined the subsidies don't apply, millions of healthy Americans will forego insurance. Premiums would skyrocket for those depending on Obamacare. Fitz-Gerald said the whole ACA could unravel.

"Capitalism being what it is, those same higher prices will, in turn, drive out larger numbers of healthy people, until only the sickest, oldest Americans are left," he said. "When you hear the words, 'death spiral' and 'health insurance' in the same sentence, this is what they're talking about," Fitz-Gerald said.

But this doesn't just impact citizens.

According to the Congressional Budget Office, a repeal of Obamacare would boost the federal government's deficit by $137 billion over the next 10 years. It could also bring the total of uninsured Americans to 24 million people. 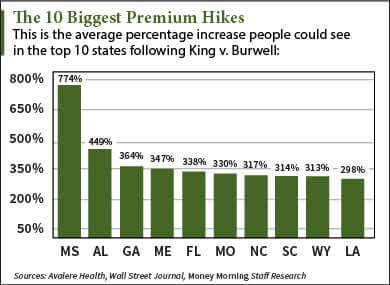 Hospitals and insurance companies would also be affected.

Before Obamacare, hospitals provided $41 billion in uncompensated care from their emergency rooms. But now that millions of new Americans are receiving subsidized insurance, these hospitals are spending much less.

If King v. Burwell passes, we could see a major slump in healthcare stocks. And that would create what Fitz-Gerald describes as a "legendary buying opportunity."

While researching the Obamacare ruling for his subscribers, Fitz-Gerald found three profit opportunities from healthcare stocks that could bottom out. Don't get caught off guard by this historic decision; profit from it...

The plan is to kill as many of us that they can!