For June 22, 2015, here's how the stock market did today, with closing numbers for the Dow Jones Industrial Average (DJIA), S&P 500, Nasdaq, and top stocks to watch... 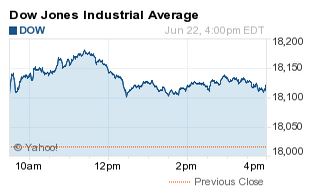 The DJIA today added nearly 104 points as investors held out hope that Greece will resolve its debt negotiations with its creditors at the International Monetary Fund.

Today, the Nasdaq Composite index hit a new record high, while the S&P 500 is now just five points off from its all-time record.