We just received one of the biggest stock market crash indicators we've seen since the 2008 financial crisis.

A Bank of America Merrill Lynch note today shows the bank's clients sold more than $4.1 billion in U.S. stocks last week. That's the largest amount in any week since January 2008, according to analyst Jill Carey Hall.

And as this chart shows, most of that selling pressure came from institutional clients: 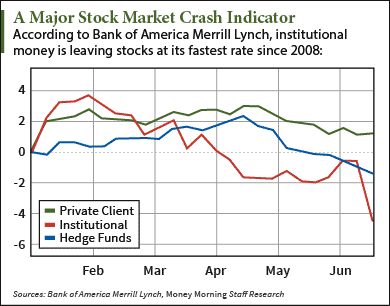 Healthcare and financial stocks saw the most selling pressure, according to the bank.

Today's news comes at a time when the broader markets are soaring. The Dow Jones Industrial Average set a record high of 18,351.36 in May and is up 1.7% in 2015. The Nasdaq Composite hit its own record high of 5,163.42 yesterday morning.

Here's how you can protect yourself in the case of a stock market crash or correction...

Money Morning Capital Wave Strategist Shah Gilani has developed a three-step strategy for profiting during a stock market crash. Instead of panicking and fleeing the markets, he turns the dipping markets in his favor.

Gilani is one of the world's foremost experts on the credit crisis. He not only called for the implosion of the U.S. financial markets in 2008, he also predicted the historic rebound that began in March 2009.

"There are lots of ways to make money when things go down," Gilani said. "But just knowing about the three most popular strategies to play price or market declines is enough for you to cash in on the next stock that plunges on disappointing earnings - or on the next bear market in blue chips."

Here are the three easy ways you can make money during a stock market crash...

I sold everything.
Maybe I am early. But I am not wrong.

You don't need to look hard for indicators. China's stock market is tanking hard, global markets don't seem to be truly awake to the Grexit threat and any 'correction' will quickly turn to crash purely because there's nowhere else for central banks to go on the already ultra low interest rates.