For June 23, 2015, here's what the stock market did today, including closing numbers for the Dow Jones Industrial Average, S&P 500, Nasdaq, the top stock market news, and stocks to watch… 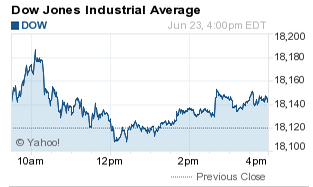 The DJIA today added 24 points. The markets reversed early losses after Federal Reserve Governor Jerome Powell said today that the U.S. economy may be prepared for two interest-rate hikes in 2015.

Today, the Nasdaq Composite Index finished at a new record close, while the S&P 500 is now a few points off from its all-time record.