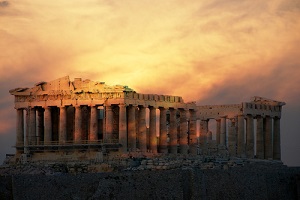 What happens when Greece defaults?

That's the question on the market's mind right now. It's no longer a question of "what happens if Greece defaults?"

The Greek debt crisis has roiled on for close to six years now with no clear end in sight. As the International Monetary Fund, the European Central Bank, and the European Commission – the troika – continue to haplessly pursue a policy of piling bailout loans on top of an already deeply indebted Greece, a breaking point has to be reached.

Greece can't repay its debts. A Greek default is the only option.

IMF staffers knew this in 2010 before then-IMF Chief Dominique Strass-Kahn silenced those internal discussions and endorsed the bailout solutions.

But default talks are no longer secluded to IMF backrooms or private meetings between European financial authorities. The discussions of a Greek default on its €328 billion ($367 billion) in debt – a 175% debt-to-GDP ratio – and even "Grexit" are now mainstream.

Right now Greece is in discussions with the troika to negotiate the disbursement of a €7.2 billion ($8 billion) tranche in bailout loans from existing €240 billion ($268.7 billion) programs authored in 2010 and 2012. Without the release of those funds, Greece can't meet debt maturity and interest payments on loans coming due.

The back-and-forth right now is more political theater than it is a good-faith effort from either side to resolve the crisis.

The troika claims it wants Greece to get its fiscal house in order with deep structural reforms, privatization, and painful-but-necessary austerity measures to trim the Greek budget. The Greek public, however, blames the austerity conditions attached to bailout loans for deepening the crisis and further impoverishing the country.

The newly elected leftist Syriza party in Greece was swept into office in January on populist voter sentiment. Syriza, led by Prime Minister Alexis Tsipras and Finance Minister Yanis Varoufakis, insist on the global stage they're coming to the table with meaningful blueprints to cut the budget and release the loans.

In reality, Greece is trying to project one image to Europe – that it's hard at work trying to appease creditors – and another to its people – that it won't fold to the unrealistic demands of European bullies.

"Varoufakis wants to make it very clear that any expulsion from the euro, if it occurs, is going to not be Syriza's fault, but it will be Europe's decision," distinguished research professor of economics at the University of Missouri-Kansas City, Michael Hudson, told Money Morning. He wants to paint "Greece as the victim of foreign economic aggression."

The troika is wary that if Greece defaults and exits the euro, it will have the potential to threaten both the reputation of the Eurozone and will throw the global balance of power into upheaval.

With the stakes so high, what happens when Greece defaults?

What Happens When Greece Defaults?