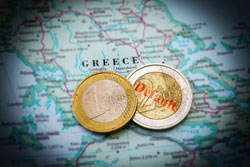 Dow futures today (Wednesday) forecasted a 67-point decline from yesterday's close as traders felt jitters over the current negotiations between Greece and its creditors. This morning, European ministers and creditors rejected a number of new proposals from the debt-ridden nation to reach a deal by this Sunday. (Editor's Note: Read here for a breakdown of what happens when – not "if" – Greece defaults.)

Yesterday, the DJIA added 25 points. The markets reversed early losses after Federal Reserve Governor Jerome Powell said today the U.S. economy may be prepared for two interest rate hikes in 2015. The Nasdaq Composite and the Russell 2000 index finished at a new record close, while the S&P 500 is now a few points off from its all-time record.