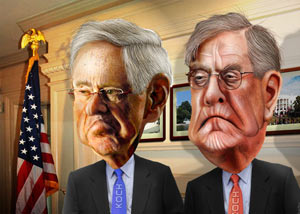 Conservative billionaire brothers Charles and David Koch have begun to vet GOP nominees for the 2016 presidential race - and there's a huge incentive to find favor with these donors...

The projected sum of the Koch brothers' political contributions this election cycle -- which would include monetary aid to their candidate of choice -- is a whopping $889 million. That's more than twice what was spent by the Republican National Committee during the 2012 election cycle.

What the Koch brothers want is a president who will do their bidding. In order to determine the best candidate for that job, the brothers will host a summer summit with the nominees they favor. (While the exact date and time of this summer's summit is unknown, last summer's conference took place in June in Dana Point, Calif.)

During the summit, the chosen candidates must speak at a large gathering of the brothers' network associates. The nominees are expected to debate, present, and strategize issues in which the Kochs are particularly invested.

Based on the candidates' performances, Charles and David will decide who gets a political contribution, and how much.

Here are the top three issues the Koch brothers want to see addressed at their summit -- and the candidates' position on each...

Koch Brothers' Political Contributions Goes to Winners of These 3 Issues

The Kochs have long funded efforts to police the voting process. For example, ample Koch brothers' political contributions have gone toward political proponents of stricter voting laws in dozens of states. These laws can keep would-be voters from getting a ballot if they cannot present government-issued identification.

Additionally, the oil barons would prefer certain demographics stay away from the voting booth: young adults, minorities, and the elderly, according to a Sept. 26, 2014 MSNBC article.

Here is where the candidates stand on voter ID laws:

Article by Abby Higgs is totally preposterous!
Just another demonization of the Koch Brothers.
Just might not the Koch brothers be concerned about the erosion of democracy by the viral left that will leave America a left wing dictatorship – maybe their concern are based on love for a free civilization – so what if they have interests – the writer has obviously her own interests does that make her a one dimensional caricature – probably by the tone of the article it would be safe to conclude yes!
As to the EPA – it has a big Social Engineering Agenda – could the writer not have outlined the EPA's prejudices since her whole article is based on her perceived prejudices of the Republican Candidates & the Koch Brothers.
Can we at least pretend to have some fair balance when we write – is not this the objective of informing opinion?

Put that $889 toward the deficit. The President of the United States shouldn't have to be bought! That's why this Country is in the shape it's in! Campaigns should be limited to the funds available by the one running. Look at all the money wasted on the last Presidential Election and we didn't need one single person to vote outside of the Electoral votes.
A waste of money just like Michelle's $600,000 dinning room renovation.