Here's why the Dow fell today, along with the biggest market movers and stocks to watch tomorrow… 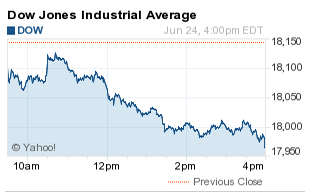 The DJIA today fell 178 points as traders felt jitters over the current negotiations between Greece and its creditors.

This morning, European ministers and creditors rejected a number of new proposals from the debt-ridden nation to reach a deal by this Sunday. The nation's creditors are demanding greater concessions and sweeping reforms.

However, anti-austerity leaders have been highly unwilling to agree to such terms.