A reeling Pandora Media Inc. (NYSE: P) has yet another reason to cry... Apple Music.

Apple Inc. (Nasdaq: AAPL) recently announced at its latest developers' conference that it will be launching Apple Music, a brand new streaming service, and will also let subscribers come in for free for a limited time.

It has them scrambling as the titan just entered their arena. And made Pandora's odds at success all the longer. Here's what we're going to do about it to profit.

A Closer Look at How This Will Set Up Our Profits

Pandora, the streaming music pioneer, was struggling prior to its latest round of bad news. Competition in the online music industry was already fierce, before Apple's entry.

Subscribing to a paid music service is something that mainstream America is still acclimating to, not unlike the initial hurdle cable television had to clear in its infancy. 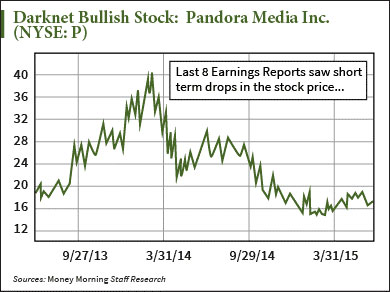 Pandora has free music channels, but with Apple entering the market, I am expecting an additional 25% drop in its paid subscriber base.

Its slumping stock price only underscores my pessimism. As we see in the above graph, it's off more than 50% from its 2013 height.

So where is Pandora going? The path of least resistance is down, but what's the probability that it will continue to go down, how far, and where's the opportunity in a $16 stock moving lower? Let's answer those questions and make our move.

What is the probability that Pandora stock will continue to trend lower, and how far?

The week following earnings for Pandora stock for the last eight earnings reports has been poor, almost without exception. Yet, when I researched it, I found that Pandora met or exceeded earning expectations for the past eight quarters.

So it wasn't the reports that drove down the stock. What, then, was it? Let's take a look at this table.

I refer to it as "Earnings Effects." It looks at what happened to the stock the following day after the earnings report was announced. Notice that in seven of the last eight quarters (highlighted in yellow), Pandora stock was trading lower, with a 13.68% downturn as the average.

So this tells me it's not the actual number. It's market expectations of a better-than-reported number. Remarkably, even good news for Pandora has proven bad for its stock!

Based on my research, the chances are good that the trend will continue.

How can someone profit from shorting such a cheap stock? By buying puts, that's how! A put option grants the buyer the right to sell a stock at a set price for a set amount of time.

Let's put this in perspective with Pandora.

That means we have the right to sell Pandora at $16 between now and September 18 and for this it takes $120 per contract.

The worst-case scenario is that Pandora goes nowhere, or up, and the most we lose is $120 per contract plus commissions.

What we are looking for is another Money Calendar indication that Pandora will move lower. If we get that average 13.5% move, we should expect the options to be a worth a minimum value of 2 points, or a 75% increase in value on the options.

As Pandora reels, don't fret. Using my method, it's easier (and more fun) to profit!

Are you recommending Pandora?

It costs $120 per contract to sell using a put offer? (Sorry if my wording is off)
This seems high, doesn't it? Can someone explain this to me?

Is this a Money Calendar recommendation or did you used another method to spot this trade opportunity?

No, Mr. J. He's placing an option bet that Pandora will FALL significantly by September 18th of this year.

So, it's a gamble with low risk and possible big percentage reward. And he's likely to buy maybe 10 contracts … not just one. BUT, he has to be right about the direction of the stock and amplitude of the move … and right pretty soon. With options, even if he gets the direction right in spades, he has to get the timing right … and that's hard.

You should take a trade like this on ONLY when you feel you have an real insight on likely movement in the stock within that time window. He has a reasonable argument for why P should drop. We'll see. The best laid plans of mice and men so often go awry … and that goes double for long option trades.

Trading long options (BUYING puts and calls) is only for those who really understand what they're doing and can afford to lose 100% on a lot of their trades.

SELLING options is the smart move for most regular folks … either covered calls or cash secured puts. By doing so, you're enabling the other guy to gamble. They pay YOU. You're like the "house" in a casino. And the house always wins over time.

Hi everyone, thanks for all the comments. Sorry I missed this update, time to get the eyes checked. Lots of posts here let me try and answer them all…

Recommendation? I do my best here to present an opportunity as well as an alternative to buying (or in this case shorting) the underlying asset. But keep in mind, these articles are past and present case studies designed for you to follow along. With the Money Calendar Alerts, I do offer Action Entry Dates and Prices, as well as Exits.

1.20 or $120 does seem a bit high but lets look at this a bit more. Some of this was intrinsic or real value. The rest of it is higher volatility than the average stock, but look at whats happened to Pandora this year… its halved itself in 12 months. The fear factor on this stock is going to be high.

Was this a Money Calendar Alert? No, not enough data to backtest a pattern on Pandora, but it makes a good hedge against a stock such as Apple since when it comes to music, they occupy the same space.

And FallingMan understands options… and I agree with everything in his post except to clarify his last paragraph. Selling options does make sense, but not on the downside. Selling naked calls isn't something most people should be doing, due to their unlimited risk nature. In fact, naked call writing is only available to top tier options traders.

As for Pandora, it has been falling since I first wrote this article, the SEP 16 puts traded at 2.20 earlier this week, close to a double. I actually expect this move to be a slow burn down myself.