The third in our series documenting the most devastating events in stock market crash history...

"We take a buck, we shoot it full of steroids and we call it leverage." - Gordon Gekko, "Wall Street II." 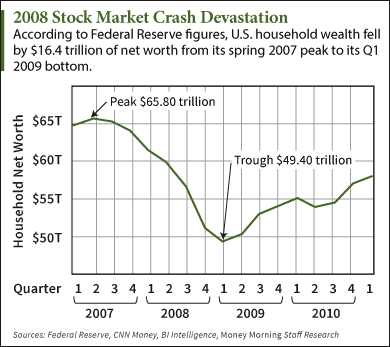 During that time, the Dow hit these gloomy milestones:

Here's a look at the events that caused the stock market crash of 2008...

What Is a Subprime Mortgage?

A subprime mortgage is a type of home loan given to individuals with poor credit ratings (usually 600 and below). Typically these individuals would be unable to qualify for traditional mortgages.

Due to the higher risk these borrowers present to banks, the banks charge increased interest rates above the prime lending rate.

When the bubble burst, prices quickly plunged. The index was at 105.7 by 2009. This surge in growth followed by rapid decline is unprecedented in the history of U.S. real housing prices, according to the U.S. Bureau of Labor Statistics.

These factors fueled the run-up in housing prices:

You see, building up to the start of the collapse in 2007, the subprime mortgage industry thrived. Historically, less than 8% of home loans given out annually were subprime loans. But from 2004 to 2006, that rate ran up to roughly 20%, with much higher rates in certain parts of the country.

Meanwhile, U.S. households became increasingly indebted. The ratio of debt to disposable personal income almost doubled from 77% in 1990 to 127% by the end of 2007.

In other words, people were given access to loans they could not afford: predatory loans.

That's because banks could afford to give bad loans, so long as borrowing homeowners' equity outpaced their debt. That's because when a borrower defaulted, the bank could foreclose on the home without taking a loss, since it was an asset with ever-increasing value.

Stock market crash trouble began when the housing bubble steeply declined in 2007. By 2009, housing prices had fallen 30% from their 2006 peak...

Why did the banks give sub prime loans? What government policies lead to this? Was it a political root cause?

There is definately a lot to know about this issue.
I really like all the points you made.