For June 26, 2015, here's the biggest news moving the Dow Jones Industrial Average today, plus closing numbers and stocks to watch  next week… 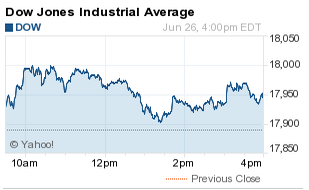 The DJIA today added 56 points as investors monitored the ongoing debt drama in Greece. The Nasdaq and S&P 500 slipped as semiconductor stocks cratered under the weight of weak forward guidance.