The Greece debt talks are at a critical point. The cash-strapped Mediterranean country must repay 1.616 billion euros ($1.8 billion) by June 30 or face default.

That would likely lead to Greece exiting the 19-nation Eurozone. Worries have already caused a run on Greek banks. Withdrawals reached more than 1.5 billion euros ($1.68 billion) on June 19.

Months of talks between Greece and international lenders have ended without an agreement. Eurozone finance ministers called off negotiations Wednesday evening after about an hour. Greek Finance Minister Yanis Varoufakis warned the gap between Greece and European Union and International Monetary Fund officials has widened.

Talks concluded Thursday with little done. Eurozone finance ministers simply gave Greece and its creditors more time to agree on conditions for additional aid. The weekend is expected to be heated with negotiations as the clock ticks.

You can find a guide to what will happen next with Greece, and how you can profit from what's happening, right here:

What Happens When Greece Defaults

That's the $1.8 billion question on the markets' minds right now. It's no longer a question of "if," but when.

But what exactly happens after a default? Who is really affected, and how does it unfold?

The fallout might surprise you - and see how Russia's involvement is making this crisis even messier...

The Greek Opportunity That's Being Missed

Money Morning Resource Specialist Peter Krauth says if Greece does leave the Eurozone and eventually lands on its feet, other struggling countries could follow.

And Krauth recommends this exchange-traded fund (ETF) to profit from what's coming...

The Tactics You Need to Profit from the Greek Debt Crisis 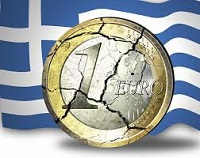 Uncertainty over the Greek debt talks' outcome and what it could mean for Greece and the rest of the world has weighed on stocks for months. After a solid open, the Dow ended Thursday down 76.71 points as Greece's bailout talks ended without an agreement.

This means it's time to buy - if you know where to look.

"The last time we saw this crisis-driven setup, savvy investors who followed along had the opportunity to take home returns of at least 245% by jumping a stock that would thrive under the circumstances," Money Morning Chief Investment Strategist Keith Fitz-Gerald writes.

Here are three tactics that will let you profit from the Grexit opportunity.

"To protect your financial health, ensure you have sufficient exposure to hard assets like gold, silver, and real estate like rental property and/or raw land," Money Morning Resource Specialist Peter Krauth writes. "But don't ignore cash, and consider that some currencies may benefit strongly in a 'Grexit' scenario."

Thanks to these six ETFs, you can easily gain exposure to these currencies.

A gold mine is something governments wish for in a national debt crisis - so why is the broke Greek government getting rid of one?

This story is about political ideology trumping common sense. You have to read it to believe it...