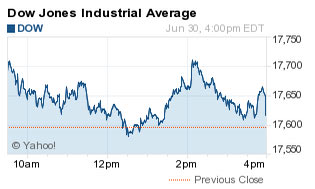 The DJIA today gained 23 points, paring gains after the Greek debt talks broke down in the final hours before the European nation falls into default. This afternoon, Germany slammed the door on Greece's last-minute request for another bailout. It would have been the third in just five years.