A PayPal stock spin-off date is just weeks away, with PayPal (Nasdaq: PYPL) stock set to begin trading on the Nasdaq on Monday, July 20. 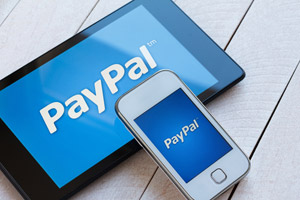 EBay Inc. (Nasdaq: EBAY) officials had announced plans for the PayPal spin-off in September 2014. But board members hadn't formally announced the approval until last Friday.

Through the PayPal spin-off, eBay stockholders as of July 8 will receive one share of PayPal stock for every share of eBay stock they own.

After the split, eBay will focus solely on e-commerce, while PayPal will remain focused on digital payments.

The two companies have a five-year contract in place that assures dependable income for PayPal following the split. eBay initially purchased PayPal for $1.5 billion back in 2002.

"eBay and PayPal are two great, special businesses," eBay President and CEO John Donahoe said in a statement. "As separate, independent companies, eBay, led by Devin Wenig, and PayPal, led by Dan Schulman, will each have a sharper focus and greater flexibility to pursue future success in their respective global commerce and payments markets."

eBay's biggest goal now is growing its user base. The platform has 25 million sellers and more than 157 million active buyers. Shoppers can browse roughly 800 million live listings at any time, according to company officials. The company had revenue of $8.8 billion in 2014.

While they have similar revenue figures, these companies are moving in two very different directions - which is why a PayPal stock spin-off makes sense...

How to Invest Following the PayPal Stock Spin-Off

Neither of these two clunky operators, eBay or PayPal, has much future; certainly not PayPal once the sham “spin-off” arrangements between these two eventually expire. And, even without the destructive guiding hand of the ex Bain cretin, Johnny Ho, the eBay marketplace will most likely continue on its journey down the toilet …

PayPal may presently be number one in the eyes of many online payers but not so in the eyes of the many small business payees that invariably bear the brunt of PayPal’s clunky, unlicensed, unregulated, uninsured, faux banking operations. …

The reality is, Apple Pay, Samsung Pay, Android Pay, et al, will soon enough overwhelm PayPal’s petty and clunky contribution to mobile payments (next time you visit Home Depot, ask the cashier how “Pay Here With PayPal” is going—LOL); methinks facebook payments will likely soon bury PayPal in the P2P payments sphere (David Marcus certainly made the right move); and the new online retail payments offerings direct from the retail banks via MasterCard (“MasterPass”) and Visa (“Visa Checkout”) will eventually bury PayPal’s online payments operations also—except on the likes of the eBay marketplace where PayPal’s “spin-off” from eBay—a spin-off that Johnny Ho fought tooth and nail against—will go down as the greatest commercial confidence trick of the twenty-first century …

Having said that, it should be noted that, being now into the eighth year of his “three-year turnaround” of eBay, and in the process thereof bringing the eBay marketplace virtually to its knees, the cretinous Johnny Ho is scheduled to remove his destructive capabilities from eBay to the spun-off PayPal, and that being the case, potential long term investors should understand that they invest in either eBay’s or PayPal’s future at their very great peril …

“Money, not morality, is the principle of commerce …”—Thomas Jefferson.

Demonstrably, that principle applies to both eBay and “PreyPal” … http://bit.ly/1nSA1Zl

And, not even the criminal code gets in the way of commerce at eBay Inc. … http://bit.ly/11F2eas

But, don’t worry, in five years time when the current exclusivity agreement between these two unscrupulous commercial entities eventually expires, they both most likely will be by then on their knees. Methinks by that time Carl Icahn will be then applying reverse pressure to get PayPal’s Johnny Ho to agree to allow eBay to re-buy the dying “PreyPal” operation (for 99c) so that they can both better attempt to continue underwriting each others’ atrophying revenues …

The eBay executive suite—where the incompetent mingle with the disingenuous, the malevolent and the outright criminal, and the just plain stupid …