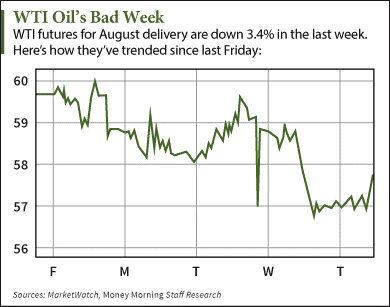 How much is a barrel of oil today, July 2, 2015: Oil prices are seeing a soft rally today (Thursday) on the coattails of a bullish U.S. jobs report.

Meanwhile, Brent oil prices saw bigger gains this morning. The international benchmark leaped 1.3% to $63.28 a barrel. That followed a loss of 2.8% in June and 2.5% in May.

Today's crude oil price movements came after the release of a new monthly U.S. jobs report. The U.S. Department of Labor reported that jobless claims increased by 10,000 to a seasonally adjusted 281,000 last month.

The jobs report deflated the U.S. dollar index by 0.27% today. Since oil is globally priced in dollars, the commodity moves in the opposite direction of the greenback because oil becomes more expensive for other currency holders when the dollar appreciates.

Prices have been volatile over the last week. WTI and Brent have dropped 1.2% and 0.9%, respectively.

According to Money Morning Global Energy Strategist Dr. Kent Moors, short-term drawbacks are to be expected.

Because the cost of oil is measured in dollars, many other influences can lower prices. That includes rising interest rates and the overall strength of the dollar. These factors cause knee-jerk downward movement in prices.

But the WTI crude oil price will gradually rise thanks to decreasing supply and increasing demand.

"One thing is clear," Moors explained. "The ratcheting effect I have been talking about – in which oil has an overall trajectory in one direction (in this case up) despite volatility in the other – is taking shape."

Still, many other analysts claim that DUC ("Drilled but Uncompleted") wells will bring down prices.

They argue that any surge in prices will entice companies to complete these unfinished wells to earn more revenue. This extra supply would flood the market and consequently decrease prices again.

But those "experts" are horribly wrong. Here are the two biggest reasons why…

Got other questions besides "how much is a barrel of oil today?" Ask us on Twitter at @AlexMcGuire92 and @moneymorning.