While the investing world is focused on Greece, events unfolding right now in Africa offer another important cautionary tale.

Thanks to reckless political and economic mismanagement, Zimbabwe holds clues to the future of other nations - like ours.

Granted, this failed state's policies have been more egregious than those perpetrated by the U.S. government against its people. Nonetheless, some of the outcomes could be similar. And I'm going to tell you one way to protect yourself.

Zimbabweans have been robbed by inflation for years and right now are now being offered compensation that's no better than an insult.

It's a frightening scenario. And those who think "it can't happen here" need only think back to the massive losses caused by runaway inflation during the Oil Shock days of the 1970s.

But preparing for it is easier than you'd think.

No One Wants to Be a "Quadrillionaire" like This

Under the country's demonetization program between June 15 and September 30, that's exactly what's being offered to bank account holders.

Use of the country's currency was abandoned in 2009 following inflation that eventually exploded to an incomprehensible 500 billion percent. 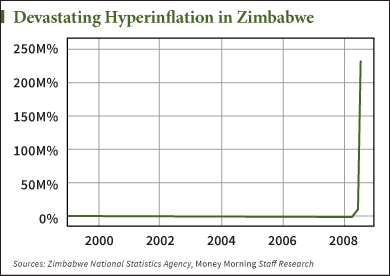 Zimbabwe is an example of how a wonderfully advanced and economically sound country (sound familiar?) can go awry.

After a bloody, 15-year civil war between the breakaway Rhodesian regime and nationalist guerillas, Zimbabwe gained its independence from Britain in 1980.

At the time, the Zimbabwe dollar was worth considerably more than the U.S. dollar. What's more, at independence, Zimbabwe was the breadbasket of Africa. It proudly boasted one of the most advanced and diverse economies on the continent.

It wouldn't stay that way for long...

Mugabe instituted price controls and printed endless amounts of cash, saying, "Where money for projects has not been found, we will print it."

Those words could've served as Zimbabwe's epitaph - or the sub rosa motto of the U.S. Federal Reserve in the years since the 2008 Financial Crisis. 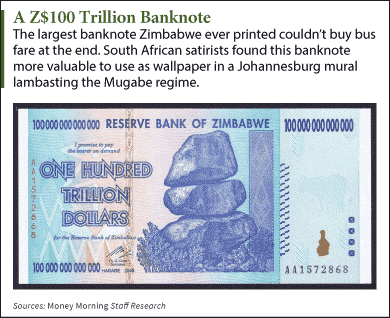 But the effects were nothing to laugh at.

Those same price controls and hyperinflation led to severe shortages for a number of staples, including meat, milk, sadza (cornmeal), and gasoline.

Unemployment eventually hit 80%. Starvation and disease stalked the land. Life expectancy plunged to 44 for men and 43 for women - among the lowest in the world. Infant mortality more than doubled by 2004, topping 12%.

And sadly, Zimbabwe is not some rare, isolated case.  Just look at Venezuela...

I won't be jumping into this one, thank you. Echo Boom births peaked in 1991-'92. These folks are now in their mid-20s, prime rental age. In no more than about ten years they'll be purchasing houses (probably at deep discounts), and the demographics-driven rental boom will be over.

Around here (Lawrence, Kansas area) there is already an over-supply of rental units and vacancy rates are now rising to uncomfortable levels.

When I can garner >5% dividends from leading telecoms and >4% from the electrics — news flash! renters and owners alike use those utilities at similar rates — an interest-sensitive 3% from a REIT dependent upon a demographic trend nearing its peak just does not interest me all that much.

Is it a better investment than Simon Property ?
Thanks for yr answer.

It is absurd comparing artificially managed economies in countries like zimbabwe to the economy of the usa. Since independence zimbabwe has fast declined to return to its african roots. Without western civilization african countries can only survive under strong dictatorships which leave very little wealth to its population.

Being a REIT, Equity Trust is obliged to pay out 90% of its net income, which represents an attractive 3.10% yield for unitholders.

The company currently has an operating margin of 35.5% and a hefty profit margin of 27.7%.