The past year has delivered one of the worst crashes in oil price history. WTI oil prices have plummeted 41% since July 2014.

It has been the worst-performing commodity in the energy sector, with prices slumping even lower than natural gas. 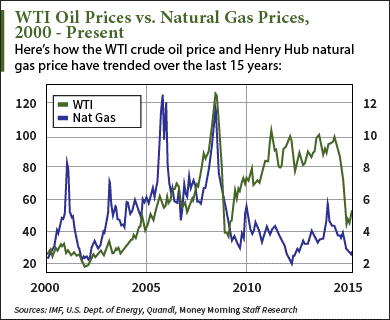 Natural gas prices have tumbled 31.9% over the same period. The energy sector hasn't been this beaten down since the 2008 financial crisis.

Both commodities saw a bubble-bursting sell-off in 2008. This was due to President Bush's lifted drilling ban and the Lehman Brothers bankruptcy, among many other causes of the financial crisis. WTI oil and natural gas respectively dropped 78.1% and 57% from July to December that year.

The price spread between oil and natural gas is important because of the amount of energy both commodities provide. You see, natural gas consumers get a lot more bang for their buck…

The price disparity stems from how both are traded. Because oil is transported in liquid form, it enjoys high demand and high prices. That liquid form also makes it easier to transport, and it's the No. 1 traded energy commodity in the world. However, because it is easily transported, its prices are exposed to geopolitical factors that can disrupt transports at any time.

Although natural gas is energy efficient, it can't be globally transported due to its physical gaseous state. That's why natural gas prices are lower and less volatile than oil prices.

But the limits of the natural gas trade are about to be removed. The United States will begin exporting liquefied natural gas (LNG) by the end of 2015 and will account for 6% to 8% of the global LNG market by 2020. This will spike worldwide demand in natural gas, providing more room for prices to soar moving forward.

More on LNG: Liquefied natural gas is about to change the world. Global LNG demand is expected to double within 10 years. With the United States poised to become one of the largest global LNG exporters, this natural gas ETF is the perfect way to play the natural gas revolution…

I've been getting ready for the LNG boon for almost a year now. Approx. 70% – 80% of my portfolio is in some way related to the oil industry at differing stages. I have been waiting for this blasted crude price drop to get over with so business can resume. I am hoping my portfolio will double in value.