When will Apple be worth a trillion dollars?

As far-fetched as the possibility of Apple at a trillion once seemed, it now appears all but inevitable. Apple Inc. (Nasdaq: AAPL) stock has spent the better part of two decades delighting shareholders and defying critics as its valuation has passed milestone after milestone. 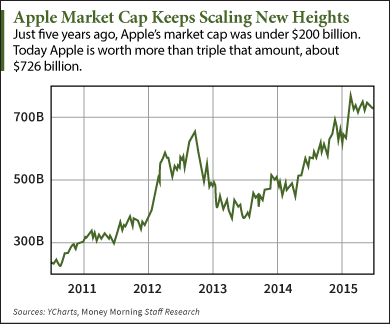 Apple stock is up more than 20,000% since the late Steve Jobs returned to lead the company in July 1997. The Apple market cap then was just $2.3 billion.

By January 2006, with the help of the iMac and iPod, Apple's valuation had soared to more than $72 billion - putting it ahead of rival Dell Inc.

By May 2010, with the help of the iPhone, Apple's valuation crossed $227 billion. That was good enough to pull it past another rival, Microsoft Corp. (Nasdaq: MSFT).

In August 2011, Apple first passed Exxon Mobil Corp. (NYSE: XOM) to take the title of "world's most valuable company" with a market cap of $346.74 billion. After a see-saw battle, Apple pulled away.

Today Apple is the most valuable company by far. Its market cap of $726 billion is double that of the current No. 2, Google Inc. (Nasdaq: GOOG, GOOGL), at $361.5 billion. (Microsoft is currently in third with a market cap of $357 billion; Exxon Mobil is in fourth at $348 billion.)

So when will Apple be worth a trillion dollars?

Two of Money Morning's experts have made nearly identical forecasts.

"I think Apple is $200 24 months from now," Money Morning Chief Investment Strategist Keith Fitz-Gerald announced on the FOX Business program "Varney & Co." in April. Given the current number of Apple shares, that Apple stock price would push the company's valuation easily past the magic number -- to an astonishing $1.152 trillion.

One month later, Money Morning Defense & Tech Specialist Michael A. Robinson received his new Apple Watch and declared that Apple would reach the $1 trillion mark by 2018.

Still, Apple needs another $224 billion to get there. Is that kind of a leap really possible in two years or so?

What Apple Needs to Reach a $1 Trillion Market Cap

When I last took a detailed look at this question in August 2014, I concluded that Apple's product lines would deliver enough profit by 2018 to push AAPL stock to the price needed for a trillion-dollar valuation.

Reviewing those numbers now, it appears I was wrong. I'm with Fitz-Gerald -- Apple will be worth a trillion dollars in less than two years.

We need a price of $173.61 for Apple to be worth a trillion dollars, though. That will require an annual EPS of $11.07. So Apple will need an extra $2 of earnings per share over the next two years.

Here's how Apple gets to a $1 trillion valuation...

When Will Apple Be Worth a Trillion Dollars? The Breakdown

With so many sources feeding its bottom line, Apple will be worth a trillion dollars well before Jan. 1, 2018. And these estimates are based on Apple's P/E ratio staying below 16. If the P/E ratio rises to 17, Apple only needs an EPS of $10.21 to reach $1 trillion.

In fact, at the rate these profits are growing, it's easy to see Apple's market cap hitting $1 trillion even sooner -- in 2016.

The Bottom Line: As Apple stock climbs, more investors are asking the question, "When will Apple be worth a trillion dollars?" The short answer is, sooner than you think. Growing sales of the iPhone, coupled with the new Apple Watch and a thriving software and services business, are virtually guaranteed to push Apple's valuation past the $1 trillion mark in less than two years.

Apple Supplier Stocks: As Apple's profits grow, so do those of many of its suppliers. While having Apple as a customer is lucrative, getting dropped can be disastrous. Here Money Morning zeroes in on five Apple suppliers that benefit from the relationship now, but could survive without it...