With the volatile Greek debt crisis raising concerns over the stability of the global financial system, finding the safest currencies to invest in has taken on a new sense of urgency.

As a type of safe-haven investment, the safest currencies are a place where you want to have at least some money when markets are unraveling and mainstay currencies like the euro are falling. 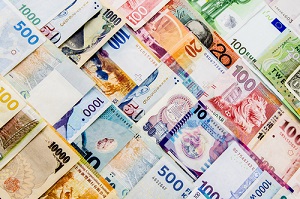 But how can an investor know which are the safest currencies?

And since the financial crisis of 2008, many central banks have gone to great lengths to devalue their currencies in an attempt to stimulate their economies. These "currency wars" have undermined the value of many of the world's major currencies.

The safest currencies tend to reside in stable nations with strong economies. The central bank of a nation with a safe currency should have a strong balance sheet, with more assets than liabilities.

The safest currencies also stand out whenever there is financial turmoil in the world. They're the ones that rise in value while less reliable currencies fall.

That sounds pretty clear, but there are anomalies.

The most obvious is the U.S. dollar, which many consider a safe-haven currency. Sure enough, the dollar tends to rise when there's trouble in the world. And the U.S. economy, the world's largest, is also among the most stable.

But the U.S. Federal Reserve, the central bank of the United States, raises questions about just how safe the dollar is in the long run. After several rounds of quantitative easing, the Fed has more than $4 trillion in U.S. Treasury debt and mortgage-backed securities on its balance sheet.

And of course, the U.S. government has a debt of $18.3 trillion. So while the U.S. dollar is better off than most other currencies, it's not necessarily the safest currency.

A true safe-haven currency should not have any of these vulnerabilities.

And it so happens that there are several to choose from, each with its own advantages...

Singapore dollar safest currency? It has depreciated by more than 10% against the USD within the past 6 months. Look: why did Singapore build two casinos in one shot in 2010? Why does it need to inflate its population by almost 80% over the past 10 years? From 3.2 million to 5 million.
It is on steroids. Like many other developed nations, the bubbles will burst someday.

There is slight controversy about SG's ability to continue supporting its current economic standing, due to many factors, including but not limited to: land capacity, water supply, and overpopulation. Though the jobs are there, those are virtual jobs, in that it is not sustainable. There are over 5.47 million people in 2014 who are citizens and Permanent residents, not counting visitors, temporary immigrants and other life forms. The economy is based on white-collar jobs, which has been proven, time and time again, to become unstable over time. These would definitely be red flags.

However, as the currency is still strengthening, it is advisable to invest while the trend carries on.

What it this thing called bitcoin??

Here's one place to start:
http://moneymorning.com/2014/12/18/bitcoin-forecast-2015-four-powerful-trends-will-deliver-a-pivotal-year/

If I open a foreign currency account with EverBank as you suggest, and if the US$ collapses and banks close, won't I still lose my money? Isn't the only sure solution to have foreign currency stored or banked in another country?