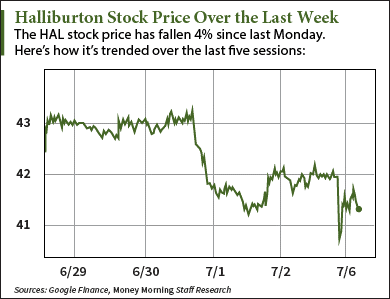 The Halliburton (NYSE: HAL) stock price is coming off of a rough month. The oilfield services giant lost 5.1% in June after gaining 15.4% during the first five months of the year.

Today’s tumble for HAL stock comes alongside crude oil’s worst day since April 14. WTI oil prices dropped more than 4% to trade near $54.50 a barrel this morning. At the same time, Brent oil prices declined 1.94% to $59.66.

It’s clear Halliburton stock is more profitable than most of the oil supermajors right now.

But does that make Halliburton stock a healthy long-term investment?

As the second-largest oilfield services (OFS) firm in the world, Halliburton is poised to soar this year as M&A activity transforms the industry.

More small oil stocks will be bought out by much larger ones throughout the year. The process will create a new group of heavyweight firms that will dominate the market.

"These types of companies could hand their shareholders a quick profit in 2015 if they get targeted."

In fact, Halliburton is about to make one of the largest acquisitions in the history of the OFS sector…

Last November, the company announced its acquisition of Baker Hughes Inc. (NYSE: BHI) – the third-largest OFS company in the world – for $34.6 billion. The deal was approved by shareholders on March 27 and is expected to close late in the second half of 2015.

After the merger is finalized, the new company will save costs and offer competitive bids against the No. 1 OFS company Schlumberger Ltd. (NYSE: SLB).

The Bottom Line: The Halliburton (NYSE: HAL) stock price took a hit today thanks to oil’s worst one-day fall in three months. But the top OFS provider is set for long-term growth as it finalizes its Baker Hughes deal and M&A activity leads the market into a new energy age.

Don’t miss any stock updates on your favorite oil companies. Follow us on Twitter at @AlexMcGuire92 and @moneymorning.

More on Energy Stocks: Master limited partnerships (MLPs) have seen immense growth over the last decade. But it's important to understand how they work. Here's how you can profit from the MLP sector, which has generated 249% in total returns since 2005…