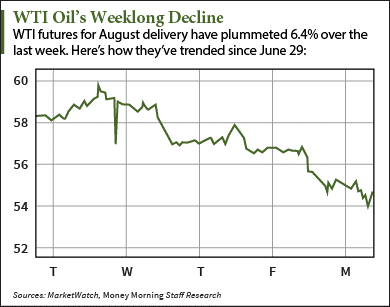 Why the WTI oil price is down today, July 6, 2015: The WTI oil price continued its weeklong fall today (Monday) amid a continuing debt crisis in Greece, plunging stock markets in China, and ongoing nuclear talks in Iran.

The Brent oil price ticked down 1.94% today and trades at $59.66 a barrel. The international benchmark hasn't closed below $60 since April 14. It's down 7% over the first three trading sessions of the month.

3 Reasons Why the WTI Oil Price Is Down Today

Yesterday, an overwhelming majority of Greek citizens voted against their international creditors' conditions for more bailout aid. More than 61% of Greeks voted against Sunday's referendum on the International Monetary Fund's demand for pension cuts, tax increases, and other economic measures.

The decision adds risks of market contagion around the world, including a sharp sell-off in oil futures over the last week.

Also adding to the downturn in the WTI oil price are crashing Chinese stock markets. The Shanghai Composite Index is down more than 25% in the last three weeks. Since China is one of the world's largest oil consumers, the country's market turmoil leads to reduced demand for oil.

"With the latest rescue measures in China over the weekend there is clearly a great deal of worry among policy makers about the state of the Chinese economy," explained Tamas Vargas, an analyst at PVM Oil brokerage, to The Wall Street Journal. "It's a huge cause for concern and as such can't be bullish for oil."

The last reason why the WTI oil price is down today is the ongoing nuclear discussion in Iran, which is expected to be completed this week. If sanctions are lifted, Iran could flood the market with supply by doubling exports to 2.3 million barrels a day.

Even if it is settled this week, it won't immediately affect WTI oil prices…