The cost of Obamacare is turning out to be higher than all but a few critics had anticipated.

Health insurance companies have submitted their Obamacare rate proposals for 2016, and many requests are for increases in the double digits. These are "individual" plans offered to those who do not get their insurance through their employer (known as "group" plans).

In at least four states - Arizona, Alabama, Idaho, and Nevada - health insurers have proposed Obamacare rate increases of at least 70%.

While that's exceptionally high, the top rate increase requests in 43 states is at least 20%.

And there are plenty of states with rate increases everywhere in between. Oregon's insurance commissioner has already approved a 25% increase for the Moda Health Plan and a 33% increase for LifeWise. Two other Oregon insurers have asked for increases of 43.97% and 51.54%.

"Rate increases will be bigger in 2016 than they have been for years and years and will have a profound effect on consumers here. Some may start wondering if insurance is affordable or if it's worth the money," Jesse Ellis O'Brien, a health advocate at the Oregon State Public Interest Research Group, told The New York Times.

Now, it's true that the rate increase proposals range all the way down to the low single digits, so the cost of Obamacare will vary greatly depending upon the state in which you live and the health plan you have.

But when you average it out, the increase is still in the double digits.

Health insurance research firm HealthPocket calculated the costs for a 40-year-old non-smoker to get an idea of what those using Obamacare can expect in 2016.

The Average Cost of Obamacare in 2016

HealthPocket found that typical premiums for all four tiers would rise in 2016, from 9% for a low-end Bronze plan to 11.75% for a top-level Platinum plan. The average Gold plan will increase by 16%, and the average Silver plan - the most popular tier, chosen by two out of three Obamacare users - would rise 14%. 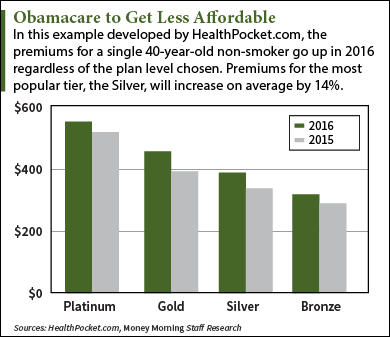 "Given the rate of general inflation in the country, and the economic situation, the rate increases were surprising to us," Kev Coleman, HealthPocket's head of research and data, told CNBC.

But with many rate increases being far higher, some unlucky folks will see their premiums go up hundreds of dollars a month as of Jan. 1, 2016.

It wasn't supposed to be this way. In fact, the supporters of the Affordable Care Act promised that insurance rates would go down, not up.

But things aren't working out as they expected...

On the contrary, it was pretty easy to predict that this is how this endeavor would play out.

People will inevitably drop their health insurance due to the high costs. Insurance companies will turn to things like home and automobile insurance to pick up the slack. The overall standard of living in this country will be lowered due to lack of personal money (now spent on ridiculously high health, home or auto insurance) and with health care out the window, the costs of natural/organic foods rising and medication being too expensive without insurance Americans will reach an all time low of consumption of fast foods. Fast foods being convenient and the only thing affordable we will see a rise in early onset diabetes and childhood obesity. Progress, right?