For July 8, 2015, here's how the stock market did today, earnings reports, the top stock market news, and stocks to watch based on today's market moves... 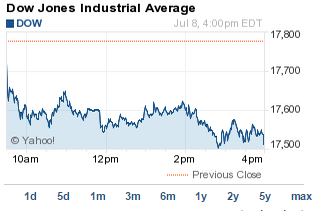 The DJIA today lost more than 261 points after a technical glitch created an outage on the New York Stock Exchange. The trading glitch rattled domestic investors - many who sat out the final hour of buying and selling - when markets are already on edge over concerns regarding Greek and Puerto Rican debt and the ongoing freefall in the Chinese stock markets. Volumes were extremely low after trading restarted at 3:10 p.m. today. Technical analysts have ruled out a cyberattack or hacking event. Some expect today's glitch may have been caused by a software update.

This was not a glitch is was the hacker anonymous. They posted threats against the NYSE the day before on social media