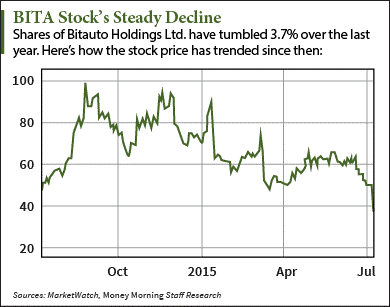 Bitauto Holdings Ltd. (NYSE ADR: BITA) is a leading Chinese e-commerce company that operates like an online showroom for car dealers. It sells online advertisements and provides reviews, pricing info, and other data for consumers.

Shares of Bitauto have become less attractive to American investors for one obvious reason - China's stock market is in the midst of a sell-off.

China's market rally over the last year and a half came when the country's wider economic growth was slowing. After all, China's GDP growth decreased from 7.7% in 2013 to 7.4% in 2014. According to the International Monetary Fund (IMF), that growth is supposed to slow to 6.8% this year.

"China's stock market had become detached from reality of China's own economy, and appallingly overvalued," said Patrick Chovanec, managing director at Silvercrest Asset Management, in a tweet yesterday. "This is gravity taking effect."

The situation only seems to be getting worse. The Shanghai Composite Index has lost 30% of its value in just the past three weeks. BITA stock is down 17.4% over the same time.

With all of this bearish news from China weighing down BITA stock, investors are wondering what's next for the BITA stock price. Here's the full answer...

Will the BITA Stock Price Rebound in 2015?