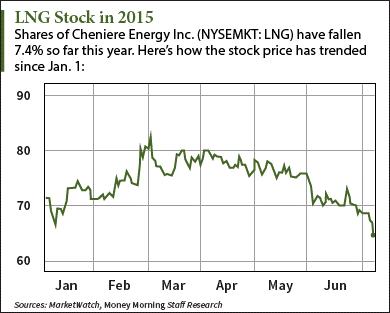 But LNG stock has seen a big sell-off recently. The liquefied natural gas (LNG) company has declined 7.4% so far in 2015. Yesterday (Wednesday), it closed at its lowest level of the year, falling 3.2% during the session and settling at $65.17 a share.

Cheniere (NYSEMKT: LNG) stock had a strong start this year in the face of falling natural gas prices. In January, shares of LNG gained 1.4%, while natural gas dropped 6.6%. The stock shot up the following month, soaring 13% between Jan. 30 and Feb. 27.

After that, Cheniere (NYSEMKT: LNG) gradually sold off. It shed 4% in March and 10.8% in the second quarter.

It's clear that Cheniere has been beaten down over the short term. Let's take a look at the long-term picture for the energy firm...

Now that LNG export regulations are loosened up, the United States is expected to provide up to 12% of worldwide LNG exports over the next five years.

"The idea of U.S. natural gas exports is so strong and unstoppable, it has the power to change the world," Money Morning Global Energy Strategist Dr. Kent Moors said about this LNG news. "It's the result of one of the biggest reversals of fortune I have ever witnessed."

Cheniere will be at the forefront of the U.S. LNG revolution. Last December, the company received approval from the U.S. Department of Energy to export LNG. This is the first time the federal government has approved an export project in over four decades.

The company is already starting to transform its import facilities into export facilities. Once that's completed, Cheniere will be processing more than 1 billion cubic feet of natural gas every day. Its two Texas terminals - Sabine Pass and Corpus Christi - are expected to be completed in early 2016.

All of this begs the question...