Many of our 2015 top stock picks were crushed by the recent downturn in the broader markets - brought on by uncertainty in China and Europe.

But one stock pick has moved against the crashing financial markets: Novavax Inc. (Nasdaq: NVAX). 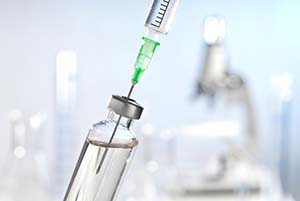 In the last two weeks, NVAX stock has jumped 9%, while the Dow Jones was down about 2% in that same period.

This biotech specializes in vaccines. Money Morning Small-Cap Investing Specialist Sid Riggs recommended the stock in November 2013. Around that time, Novavax was making strides in a vaccine for avian flu. We highlighted Novavax throughout 2014.

This small-cap stock is up 292% since Riggs' first recommendation.

Riggs originally liked NVAX stock because of its revolutionary approach to flu vaccines.

"The way I see things, Novavax represents a paradigm shift in the way vaccines are currently produced," Riggs said in November 2013. "The Novavax method implements a disposable, single-use manufacturing system - eliminating the need to clean and sterilize equipment between batches. That means an antivirus production facility can be built at a fraction of the cost traditional methods require."

Still, it's important to keep in mind that this stock ebbs and flows, as is the case with many small-cap biotech stocks. In February, we said investors should be wary of this stock and wait for a better entry point. It was up more than 60% when we issued that warning.

To see where NVAX stock sits atop our 2015 top stock picks, check out the table below.

Here are our top 10 stock picks for year-to-date gains as of the July 9 close.

This will be the "Summer of  the Small-Cap Stocks," says one expert. Here's where to profit...