"The Greatest Outdoor Show on Earth," the century-old annual Calgary Stampede rodeo and festival, has just gotten underway. But while a million-plus visitors enjoy all the city has to offer, all is not well for petroleum companies in the city dubbed Canada's oil headquarters.

A few short months ago, a forty-four year political dynasty came to an end, as the oil-rich Canadian province of Alberta elected a left-wing government that wants to extract more revenue from energy companies.

Yet canny investors like you can take advantage of hidden opportunities that are emerging as others head for the exits over worries about the new administration's goal of collecting more royalties from oil and gas producers. Here's one….

The dramatic oil price drop has not just hurt American producers, but Canadian producers as well. With 168 billion barrels of reserves, Alberta alone is No. 3 in the world, behind Saudi Arabia and Venezuela. 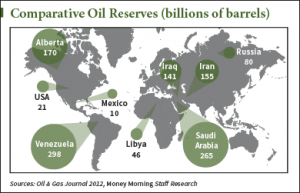 It's been the epicenter of oil production in Canada for decades thanks to a business-oriented provincial government.

But compounding the effect of low oil prices is a new regime with its sights set on raising corporate taxes and taking a bigger bite of Alberta's oil revenue.

Rachel Notley, Alberta's recently elected New Democratic Party leader, has promised to disclose before the fall exactly how her party's review of the province's oil and gas royalties would proceed.

According to the Conference Board of Canada, weak oil prices and job cuts weighing on Alberta's crucial energy industry are likely to trigger a recession this year. That could force Notley to tread lightly, but the uncertainty still has caused investors to remain hesitant.

Boosting royalty rates will cut into the already lean profits of oil and gas producers on production from government-controlled land, representing 81% of mineral rights.

The remaining 19% of mineral rights are held privately by individuals and corporations.

And one company is exquisitely set to benefit from its vast portfolio of the latter.

An Investment Beyond the Government's Reach

What makes Freehold attractive to us is that it has a large holding of private royalties on land, rather than assets that produce oil and gas outright.

A royalty is a payment based on a percentage of the gross well production, without the responsibility of expenses associated with operating the well. That falls on the working interest owner.

The company owns 3.5 million gross acres of land located mostly in Alberta and the neighboring province of Saskatchewan. More specifically, FRU holds both mineral title and gross royalties. Of particular interest is their position in 750,000 acres of mineral title lands, which are perpetual rights.

First though, we'll look at a little history to provide context and understand exactly how Freehold ended up with such valuable assets.

The Real Value of Royalties

Freehold first went public in 1996 and used the proceeds to secure royalties and working interest properties. At the time the Canadian National Railways Pension Fund spun out about 500,000 acres, which were FRU's initial holdings.

So how does Freehold generate income?