The Bitcoin value today jumped 8.5% in 90 minutes as buying on Bitcoin exchanges in China surged. 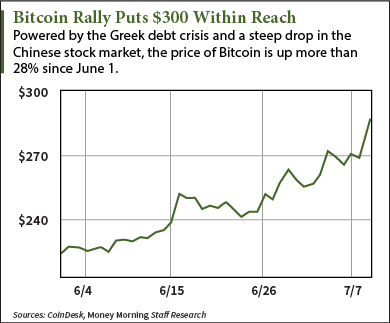 The rise in the Bitcoin value today capped off a strong six-week period for the cryptocurrency that has seen the price increase more than 28%.

The broader surge has coincided with the deepening of the Greek debt crisis and a sharp 30% decline in the Chinese stock market.

While Greece's bank closings have demonstrated the value of Bitcoin in a financial crisis, the situation in China has more to do with the movement of capital out of stocks.

However, the spike in the Bitcoin value today appears to be entirely China-related. The surge occurred between 4 p.m. and 5:30 p.m. Beijing time, which was 7 a.m. in London and 4 a.m. in New York.

It may surprise some that China can still drive the price of Bitcoin, but enthusiasm for the digital currency there has never waned. In fact, interest continues to grow despite government restrictions forbidding Chinese banks from handling Bitcoin.

According to a March report from Goldman Sachs Group Inc. (NYSE: GS), the Chinese yuan makes up nearly 80% of global Bitcoin exchange volume, a steep increase from about 50% in January 2014.

Even if nothing had happened in China, the Bitcoin value today probably would have gotten at least a little bump from a very different catalyst.

Wedbush Securities, which started following Bitcoin last year, issued a new report yesterday (Thursday) that suggested the Bitcoin value will reach $409 over the next 12 months.

That's a 40% gain from the current Bitcoin price, even after the steep rise over the past six weeks.

Wedbush sees the value of Bitcoin as dependent on how widely used it becomes in the years ahead. It's worth noting that the $409 figure is the present value of what Wedbush calculated would be required to support the Bitcoin economy in the year 2025, assuming Bitcoin gains traction as a vehicle for remittances, micro-transactions, and other "specific use cases."

Wedbush estimated the 2025 Bitcoin economy could be worth $231.81 billion, which by then would require a lofty Bitcoin price of $11,840. The present value of $409 is so low because Wedbush used a huge discount rate of 40% to reflect the uncertainty surrounding the future of the digital currency.

But in a third scenario, in which Bitcoin becomes the "global working capital of trade" - which would require a $20 trillion monetary base - the Bitcoin value would go to $1 million.

Wedbush calculated the odds of that scenario happening at just 0.02%, however.

Where to Buy Bitcoins: Over the past few months, innovative companies around the world have expanded the places where people can buy bitcoins from just online exchanges and Bitcoin ATMs. You'll be shocked at where you can buy bitcoins now. There may even be a place in your neighborhood...

It was originally Silk Road that led the market when it invoves the dark trade, however the
arrest of its founder brought the darknet site down.