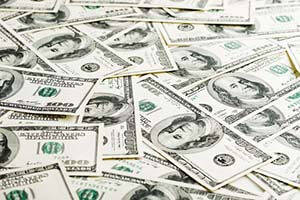 Policymakers need to start being more honest about how the U.S. debt works.

It's an age-old debate among the members of Congress. How do we cut the budget? How do we reduce the debt?

But the argument over whether to raise taxes on the rich or cut spending to social programs is not the most frustrating part of this never-ending debate.

Rather, the whole debate is built off a misunderstanding of how the U.S. debt works and how the government spends money.

At best, Congress is ignorant of the process. At worst, they're fully aware of how the U.S. debt works and are simply molding their arguments to push a sinister political agenda.

Here's what no one in Congress is telling you about how the U.S. debt works...

How the U.S. Debt Works

The U.S. Federal Reserve acts as the U.S. government's banker. It is also the banker for the private sector's commercial banks and for foreign holders of U.S. dollars.

When the government wants to make a purchase, it simply wires money to a commercial bank and those funds are held as an overdraft in the commercial bank's reserve account at the Fed.

Where did the U.S. government get that money in the first place? It wasn't drawing on tax money or surplus funds.

It simply changed numbers on a digital spreadsheet with keystrokes on a computer keyboard. If the weapons system cost $10 billion, the U.S. Treasury would simply mark up the reserve account of the bank $10 billion for the defense contractor.

That's all government spending is. The United States issues the dollar. It can create dollars out of thin air indefinitely. There is no spending constraint. Anyone who says the United States is running out of money or who thinks the U.S. government would be unable to pay back debt doesn't understand how the U.S. debt works.

That brings us to the issue of the $18.2 trillion debt.

This is the most absurd explanation I think I've ever heard. To suggest that spending "doesn't matter" (except for inflation) is myopic! It certainly will matter when foreign entities have had enough of the mindless US government spending and it's citizenry ops away from the USD! Then what? Digitally print more? Sorry Jim. No sale here! We are heading for a massive reset. The illusion of "wealth" that many have will turn to anger and despair when they realize they've been fleeced by their government. Jim, there is no "free lunch". Reckless spending without regard for those whose "money" you are taking (under duress very often, vis-a-vis the IRS) most definitely comes at great cost. To think otherwise shows (at best) a woefully weak knowledge of history! Does ancient Rome ring a bell? America mirror has smashed! Some noble patriots are left… trying desperately to glue it back together! Printing money will not fix anything. Returning to the Constitution will!

“The more corrupt the state, the more numerous the laws.”
? Tacitus, The Annals of Imperial Rome

I'm not here to make the argument that the U.S. can spend as much as it wants indefinitely with no consequence. I'm more concerned with shifting the dialogue so people understand that as long as the U.S.'s debt is denominated in dollars, it can't default unless Congress decides it wants to. That is, the U.S. can't run out of money when the U.S. itself creates it so seamlessly out of thin air on an electronic spreadsheet.

Obviously, if the U.S. Treasury created so many dollars that it outpaced the ability of the U.S. to produce goods and services and inflation kicks in then we'd run into trouble. If this caused the dollar to become so weak that the U.S. could no longer buy goods and services in foreign markets with dollars, then the U.S. would have to start building bigger reserves of foreign currencies to pay for imports.

At this point, the U.S. could very well see itself running up a tab of foreign debt denominated in a currency it can't print. That's when the debt becomes a problem and default is a possibility.

But for Congress to paralyze budget negotiations and to threaten to default on the U.S. debt as has happened in the last few years is dishonest and a faulty premise to build this argument.