Millions of investors around the world are watching China's stock markets with bated breath, given that the Shanghai and Shenzhen bourses have lost more than $3 trillion in market capitalization between them over the past three weeks - a real money amount that's greater than Brazil's annual output or Spain's entire stock market, according to Bloomberg.

Well, you and I both know that "hope" is not a viable investment strategy. In reality, a Chinese market correction is exactly what's needed and what every savvy investor knows has to happen, even if they don't "want" to see it.

Once you understand why, you won't want to miss out on what happens next.

Here's what most investors are missing and how to get a piece of the Red Dragon.

Legions of "experts" are falling all over themselves recently to pronounce China's imminent collapse. Never mind that most of them have never set foot in country, but it's hard not to pay attention.

More than 40% of Chinese stocks were halted last Wednesday, meaning trading was suspended for more than 1,200 of 2,808 listed issues, according to Cninfo.com.

Comparisons between what's happening there now and what happened here in 1929 just before the Great Depression raged across the Internet, even though Chinese markets seem to be gaining at least some semblance of stability.

... The Parallels with 1929 Are Uncanny - The Daily Telegraph

... Forget about Greece, China Is Cause to Freak Out - MarketWatch

Things are so bad that even Chinese regulators are reporting that this is the largest wave of trading halts in the history of that country's equity markets. Given that China's bureaucrats are notorious for publishing only sunshine accounts of what's happening there, that's a serious development.

Yet, it's not the end of the financial universe. In fact, China's markets have a long history of growth and contraction.

From 1990 to 1992 they rose 629% and fell off 71% before a brilliant U-turn and another run up of 97% into early 1993. Then they took off on a brilliant run that saw the Shanghai index peak eight years later in June 2001 after it'd tacked on additional gains of 156% - staggering growth considering the gains it was already building off of. 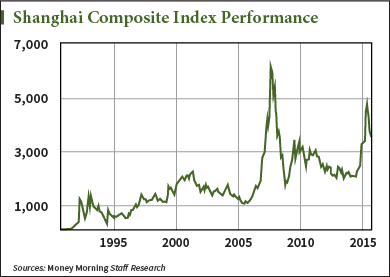 But that was chump change compared to the 396% run from June 2005 to October 2007. Even the most recent run-up is a story of triple digits.

The next run up will be, too.

Keep the following in mind and chances are you'll do just fine...

Hmmm…yet your own Shah Gilani said this. Seems like a bit of a discrepancy.

"In spite of everything Chinese authorities and regulators are doing to shore up the stock market, there's a better than 50% chance their efforts will fail and that a devastating crash could send global markets back into a 2008-era financial crisis."

The Money Morning experts don't always agree 100%. They're all very smart guys but they don't think in lockstep – and who would want that?
So yes, there is a slight discrepancy in their opinions. I suggest readers take a look at both for a more complete understanding of what's happening in China right now.

And thanks for reading Money Morning!

Hi Keith,
It has been quite some time since we met during Freedomfest.
Thank you for all the hard work you put into your articles which I look forward to reading. ; }

I have been to China and I have seen the Good, the Bad, The Ugly, the Beautiful and the Disgusting. Besides the markets, China has some very serious problems which impacts the rest of the world.

You understand very well the Chinese mentality!
I'm not Chinese (though I have many good Chinese friends) but our people have more than 4000 years experiences living next door to China and have fended off countless of their manipulations in every type , shape and size over those 4000 years !

Do you think China's stock market run-up and subsequent sell-off is more like the 1987 U.S. Stock Market Collapse, or is it more serious, such as a possible "1929" for China. I happen to see it as something in-between, but its just my best guess. I sure see no immediate hurry to jump in right now.

For stocks like Alibaba, I would like to see it priced a bit lower, but as long as the U.S. Market holds firm, it may not go much further. Another intermediate term factor, Janet Yellen, won't be raising interest rates very much this year and certainly not next year during a election year. One and done I think.

"Chinese money managers are simply dumping holdings related to the excess margin they've got on the books. "

If that was the case then why have they only dumped their stocks this year, at a time when all eyes were on Greece? It never happened last year.
From what I've heard about Chinese companies is that they have 2 books for every business. One for the regulators, the other for their real accounts.

This Chinese index-webpage includes the companies that cause the most volatility on the
Hang Seng Index based in Hong Kong.
http://www.hsi.com.hk/HSI-Net/HSI-Net

And if you watch it in real-time, you will note that on most days, our beloved UK bank, HSBC Holdings, cause the most volatility out of all the companies there on a normal trading day.
I would speculate that HSBC Holdings are now becoming bagholders whilst the retail investors are allowed to sell after the Chinese authorities buy in and inflate asset prices.
I believe this process will be repeated on a daily basis until the shackles are removed from the largest shareholders (>5% in holdings) in Dec/Jan.

Please note:
The Hang Seng index is extremely volatile and even more so at this moment in time.
Trading the HSI is only for those who are averse to risk and enjoy rollercoaster rides.

There are plenty of China ETFs and companies we know that work in China. No need to buy Red Dragon Industries in Quinquiliquing…

Keith,
There has been some talk, about China's yuan becoming a world reserve currency. Could you elaborate on this? And what could this do for Chinese stocks? Is it possible for the Chinese market to be catapulted into the stratosphere?

Thanks for the great work you and the whole Money Map Team do.

I suppose this ties in with the BRICS cooperating and their new development bank.
Yes, it would be really great to get some perspective on that!

So what would be a good NYSE traded "red army" fund to buy to catch the uptick?

Too many people on both sides of the Atlantic are constantly predicting the demise of Europe, China and Russia.
The Chinese stock market is going through a correction, and it needs to grow up.
The US market has been through plenty of corrections, and it's still around!
The IMF is saying that Europe, the real economy, is improving.
Even Russia didn't collapse in the currency crisis last year.
Now there's more East – East trade and cooperation, which is a good thing. I suppose that what I'm trying to say is that an ever more integrated world is a body that needs all its parts…